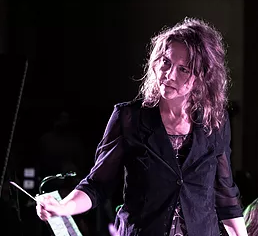 Australian born composer and pianist, Amanda Lee Falkenberg, began her journey into composition through the hours spent in the ballet studio as dance accompanist with the Australian Ballet company in 2000. She wrote over 120 compositions to accompany ballet dancers as they trained, which led to the production of her Moving With Music 3-part CD series. In 2003 saw the world premier of her orchestral 30 minute ballet “Edge of the World” commissioned and performed at the International Barossa Music Festival with the prestigious Leigh Warren and Dancers which received glowing reviews from the National press.

Falkenberg is inspired by visual imagery, so natural progression led her to write for film and TV. stage plays, documentaries, feature films including a 13 part animation series featuring voice over talents Lucy Lui and Mark Hamill. In July 2017 her 10 minute orchestral suite “Sea Trilogy” received a world premier at the London Film Music Orchestra Gala Concert with herself conducting.

In October 2017, having just completed a concerto for piano and orchestra called “Crossing of the Crescent Moon” Falkenberg began work on her 7 movement Symphony called THE MOONS which celebrates past, present and future missions to moons of our outer solar system. Falkenberg has given several presentations in Dubai and London to discuss her creative process as a composer and earlier this year was invited to present at a Ted x Youth conference in Dubai “Composing Music to tell the Secrets of the Moons” where she discussed her latest creation THE MOONS Symphony.

Following this was a presentation in July this year at NASA/JPL, Los Angeles for the Cassini Project Science Group including lead scientists Dr Linda Spilker, Dr Earl Maize and Dr Scott Eddington, where she presented the music and scientific inspiration for four completed movements from her MOONS Symphony as she has been consulting with lead scientist, Dr Robert Pappalardo, Dr Ashleey Davies from NASA and Dr Ralph Lorenze from John Hopkins University/APL for accuracy during the conceptual phase.

That same month, she also presented her music from the 1st Movement of THE MOONS symphony dedicated to moon Europa at Caltech, Pasadena for the international Europa Clipper/JUICE scientists conference including Europa Clipper lead scientist, Dr Robert Pappalardo, former NASA /JPL Director, Dr Charles Elachi, and director of Lunar Planetary Institute, Dr Louise Prockter, who came together for the first time to discuss synergistic and complementary science with their teams since both missions will be at the Jovian system at the same time.

Falkenberg has received many nominations and has won multiple international contests including, The Great American Song Contest, Marvin Hamlisch emerging film composer contest in New York, The International Composition Competition in Italy, Hollywood Music in Media Awards (HMMA), and the Los Angeles Music Awards. The Moons Symphony celebrates the merging of art and science to inspire and educate wider communities at large and to provide a theatrical foundation for the thrilling stories of these moons and the spectacular discoveries being made in our outer solar system.