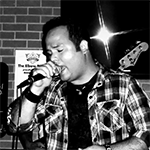 Benjamin Hyatt was born in Nashville, TN and moved around a lot growing up because his father was in the military. He followed in his father’s footsteps by joining the army after earning his degree from the University of Central Missouri where he received a scholarship for choir.

Growing up he was the lead singer/songwriter for two bands, however he eventually moved onto “more stable work”. He never gave up on his passion for music and one night it paid off at a local karaoke spot in Arizona. A producer from Nashville told him he should record and that is just what he did. Benjamin recorded passionate hit-sounding songs like “Without You” and “The Way You Move” which created enough buzz for labels to start knocking at his door. Benjamin’s influences include Matchbox 20, Hootie and the Blowfish, Blessid Union of Souls, GooGoo Dolls, Boys II Men, Vivaldi, Steven Curtis Chapman, Jars of Clay, GRITS and DC Talk.

Keith Meenan is the lead guitarist and hails from Idaho, the land of potatoes. His family has many ties with the music world, and he was thrown into music at an early age. He is a skilled guitarist but also plays piano, drums, bass, and saxophone. Most importantly, he is the Kazoo wizard, with an emphasis on guitar. His influences are mainly Dream Theater, Vivaldi, Zeppelin, Pink Floyd, and Yanni.

Austin Lee   a bassist from San Francisco California who studied under Metallica’s bassist ‘Jason Newstead’ He has been playing and studying different forms of music for most of his life. He’s a multi-talented musician and an honour student at the U of A, pursuing MBA. His influences include Pearl Jam, Rage Against the Machine, Red Hot Chili Peppers, Morrissey & Sublime.

Houston Huff – Is the drummer who has lived/grown up in Tucson AZ. He comes from an automotive family, which probably explains his love of hitting things, hard and fast. Although he comes from a Punk background, he has taken stride in the progressive world of drumming. His influences include Blink 182, KISS, Cat Stevens, Sum 41, and the great DREAM THEATER.

Skyler Freeman – A multi-talented instrumentalist, plays rhythm guitar, keyboard, back-up vocals for the band, but also plays the drums and bass. Skyler was born in St. Louis, Missouri, but grew up in Tucson. His influences include his family who are also talented musicians and Skyler tries to gain musical knowledge by listening to whatever he can get his hands on.