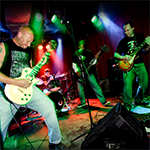 Black Dawn’s most direct musical influences include Godsmack, White Zombie, and Five Finger Death Punch. Black Dawn’s discography consists of the demo “Black Dawn” (1996), two full-length CDs – “Absence of Time” (1999) and “Age of Reason” (2004), and the EP “Until We Meet” (2014). Selected tracks from all of these releases have been included in rotation on hundreds of various college / Internet radio stations and podcasts worldwide. “Until We Meet” was released via Blue Pie Records.

Black Dawn has been performing live music in the metal / hard rock genre in the Long Island / New York City area since 1996. Black Dawn is:

Black Dawn has performed in many famous venues in New York City including Webster Hall, CBGB’s, Continental, Hard Rock Cafe, Stage 48, and The Gramercy Theater; as well as The Chance Theater in Poughkeepsie, NY, Starland Ballroom in Sayreville, NJ, and the Space Theater and Paramount, both on Long Island.

In late 2017, Black Dawn signed with Pavement Entertainment, a Chicago-based independent label, to prepare for the release of the fifth studio album, “On Blackened Wings”, released in 2018.