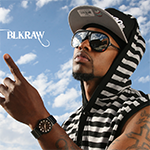 BLKRAW was born in Oakland, California on June 29th. He grew up between Tampa, FL., and El Centro, CA. He was encouraged to start his career in the music industry by his now deceased brother, Sean C. Fuller. BLKRAW was only 17 years old when he and Sean had a car accident in 1998. BLKRAW has since dedicated his time and efforts to he and his brother’s shared dream to make it in the music industry. BLKRAW gets most of his musical inspiration from music itself. Artist such as LL Cool J, Nelly, Big Daddy Kane, Kool Mo Dee, Heavy D, 2 Pac, B.I.G… as BLKRAW says, “I could go on and on”. Yet most of his inspiration of course came from his big brother. BLKRAW has opened for Slip N Slides Rick Ross, in Tampa, FL., Club 112, Nina Ski in Mexicali, Mexico and E-40 from Sick Wid It Records in El Centro CA., just to name a few.

BLKRAW is unique, one of a kind, energetic, and the hardest working unsigned artist out of El Centro, CA. You can’t put him in a box, he has a flow that’s universal to all, not just one genre. BLKRAW takes his listeners on a musical journey with that all-round Hip- Hop and R&B feel. His hip hop style is smooth: BLKRAW’s work features great vocals, great lyrics and great rhythms.

Growing up with music being the face of his household, BLKRAW has always been surrounded by music. If it was not his mother playing her old school jams, (Smokey Robinson, Temptations) it was his big brother Sean C. Fuller singing Jodeci, or writing and performing a talent show. In the late 80′s early 90′s, after his brother’s death in 1998, BLKRAW started to take his music career seriously. In 2003, he began to record songs, and has not looked back since. His work ethic is what sets him apart from the others. His self-identity is something that he defines by the trait that what he lacks in one area, he picks up in the next.

BLKRAW would like his future fans to understand he is human, and real, just like they are. When working in the studio, he works hard to connect with his fans through his lyrical content. He also takes a few hours out of his busy day to thank and respond to his fans.

BLKRAW’s single, “Do Ya Right”, has charted on Internet and Satellite radio nationally at #8 with Urban Top 30 Mediaguide Artist Adds, and #5 on Live365. Currently one of the most requested tracks, “Do Ya Right” continues to climb the charts and pick up stations! He is a trailblazer, and with the inspiration of the music he loves and the memories of his brother acting as fuel for his journey, he’s sure to travel further and further in this industry than he can possibly dream.