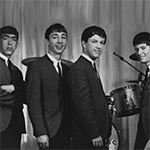 At 75 years of age, there’s no stopping Bobby Polhemus of the Teemates. Still performing live shows after being in the music business for almost 5 decades, it is absolutely amazing to see Bobby put on his own visceral live performance. He moves seamlessly through his sets naturally and with minimal effort, at first playing a hard rock number followed promptly by a quiet folk melody and to end his performance an old school Doowop number from Johnny Maestro and the Crests. Bobby, despite his status as an old school rock icon, still remains down to earth after all these years as a rock star. He still maintains his unique 60’s twang and his relaxed and casual demeanor, always wanting to be involved with the real people of the world.

Bobby’s biggest contribution to music was when formed the blues band, The Teemates after he had won a Battle of the Bands Contest in Rockland Country New York with his fellow band members Bryan Post, Ritchie Staff and Robbie Lundius. In 1963, aspiring songwriter Joseph Shefsky thought it would be beneficial to get Bobby and a few members of his band involved in a creative aspect for an Off Broadway Show he was producing. Instead of writing songs for Shefsky and his productions, Bobby turned some of his songs into Rock N Roll numbers and the Teemates were born, releasing an under the radar gem called “She’s so alone”.

Upon settling a number of lineup changes internally in the band, they officially debuted their live show at the New York State Pavilion at the Worlds Fair in 1964. With many comparisons to the look, style and sound of The Beatles who had just made their American debut earlier in the same year, The Teemates were wildly hyped as the next big thing, even covering some The Beatles songs during their performance. Their appearance at the Worlds Fair caught the attention of Spin DJ Cousin Brucie and Scot Muni, both popular rock DJs at the time. After receiving high praise and kudos from their DJ counterparts, Bobby and The Teemates were set to take on the world, opening and backing some of the greatest artists of all time including Jerry Lee Lewis, Fats Domino, Chubby Checker, The Ronettes and Chubby Checker. The Teemates quickly developed a reputation for high-energy octane appearances and after their performances at the famed Disc Jokey Scot Munis Rolling Stone Nightclub in NYC as the regular house band, every credible rock act in the world came to know the theatrics and musical styling of The Teemates.

Today Bobby still performs his old Teemates material and because of the various reissues of the tracks off the Teemates LP, has generated an entire new generation of fans.  His recent release of “530 East 87 Street” is a four song EP but the focus is on the Singles Bad Business or Dem Codependence Blues. He still performs regularly at Venues across the Country.