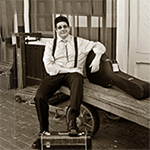 Currently residing in Vienna Virginia, Brother Lou started his musical journey in bands throughout the east coast, receiving accolades for his song writing. He was awarded as the official selection in The Song of the Year contest sponsored by VH1, became the winner of The Great American Song contest and third in American Songwriter Magazine Best Lyric contest. With these titles under his belt, Brother Lou is set to take over the folk industry.

Following in the footsteps of legends such as Bob Dylan, Leonard Cohen and Warren Zevon, Brother Lou wanders the blues path alone. His provocative folk tunes brings back the nostalgic era of the 70’s. With a guitar in hand, Brother Lou falls under the flow of writing and recording. Time loses meaning as he composes. Brother Lou explains it as a state of living that’s beyond anything else as he searches for the perfect standalone song to make his own. Brother Lou employs a freestyle range of composing. He believes song writing should not be constrained by formulas.

In 2008, Brother Lou released his debut record, ‘As Good As You Want’ which was re-released in 2010 through Blue Pie Records. The album is best enjoyed after a hard day’s work, along with a glass of cold beer. Featuring seminal tunes such as his midnight waltz, ‘Elizabeth’ and the raw, ‘One Blues’, Brother Lou’s releases has set the foundations of a new raconteur of the American Dream. The following year, Brother Lou released his sophomore effort, The Devil in Me’, which surged up on The Alternate Route’s Top 66 International Americana Radio Chart. This single takes on a darker tone, with the use of a dusty guitar. Brother Lou creates a unique style of folky blues parallel to the great Johnny Cash. With an ever-growing fan base, the horizon looks promising for Brother Lou.