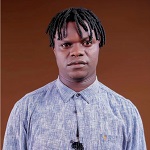 Cammen is an up-and-comer on Spotify, and his dope beats have been turning our head at Blue Pie since we featured him on Soundwaves From Africa volume 44 back in 2018! Featuring sweet beats, killer sax and emotional vocals, Cammen’s music is infectious and it’s clear why he’s amassing a following as rapidly as he is.

He’s turned heads in the Spotify and Youtube games, but he isn’t just a rookie any more, and has been releasing track after track after track to the platform. All of them are catchy, and while they don’t all have music videos just yet, they’re perfect additions to any playlist that wants a bit of a beat to kick it into overdrive. Every track you discover of Cammen’s leads to yet more great musical discoveries, as you realise each track you thought was the best you’ve heard was just smoke coming from the fire that is his deeper catalogue! Each of his songs hit hard and stand tall, even among their peers, and all of them have a special Je Ne Sais Quoi that help them all remain unique. Good stuff!

And of course, Cammen is still featuring on plenty of compilations, which is sure to help even more folks discover him. Here’s just a tiny sample of the kinds of works he’s featured on, with some of the best African musical names in the business right alongside him. Sit back and get ready to hear some of the zestiest music you ever will. That’s the rule that all of Camba Music Records’ artists abide by, and we’re very grateful to be teaming up with them via our cooperation with Cammen.

It’s only a matter of time until Cammen throws even more bangers up online, and we’re hyped to see just what he’ll come up with next! How about you, you hype for the Cammen-flavoured future?