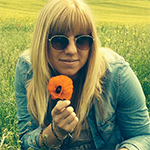 Chloë Chadwick grew up in Staffordshire, but for the past few years has called the North East home, so much so that she’s been dubbed “The Northern Country Queen”. In 2016 and 2017, she was nominated in the “Best Female Artist” & “Best UK Country Act” category at the UK Country Music Awards.

Chadwick has performed for 15 years, across the UK and Europe, honing her own distinctive blend of music which effortlessly blurs the boundaries between Americana, country and pop. She has played prestigious venues such as The Sage Gateshead, Dublin Castle Camden and Festivals such as SummerTyne, C2C, & Beverley Folk Festival where she has performed alongside such renowned acts as The Shires, Ward Thomas, Striking Matches, Gretchen Peters and Emmylou Harris, to name but a few.

Chloë has opened shows for a huge array of well known names; Sam Outlaw, Nell Bryden, Jeff Finlin, Tia McGraff and Nikki Lane, who have raved about performances, and everywhere she has played she has attracted attention, leading to an appearance on HotDisc and countless radio performances, including assorted BBC stations.

2015 saw Chloë embark on a life changing journey across the pond to the States with Blue Pie Records, recording her self penned song ‘Big River’ alongside ace U.S producer Chris Garcia and his mixing partner Tom Polce. The song later became one of Chloë’s favourites on her debut album. She also collaborated with the likes of Kevin Dippold and Canadian singer/songwriter Noble Taylor; together they wrote songs for emerging artists signed to the label.

In 2016, she returned to the UK and embarked on her first headline tour, in support of her highly acclaimed, self titled EP.

Compared to such performers as Melissa Etheridge, Chadwick has recently released her debut album, Dustbowl Jukebox, which is receiving rave reviews. As an emerging female country singer, her Intense, powerful vocals, stunning production and stirring lyrics make this a CD which simply has to be heard. Dustbowl Jukebox was produced in the main at Cluny Studios by Tony Davis and mixed by Patrick Jordan. Every song finds its own identity, be it rooted in pop, rock, country, blues or soul, and together, they are a testament to the versatility of Chloe’s vocal capabilities, as she effortlessly takes us on a ten track musical journey. This is evidenced in the fact that it soared to the top 14 of the iTunes Country chart, within days of its release.