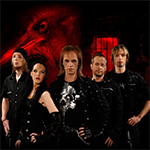 CROW7 hail from Germany. The band is all things “classic rock”. The band is surrounded by the energy of mystic forces that brought the band to call themselves “CROW7”. The name was derived from an ancient Indian Totem and the life path number of the band founder and leader Corbin Eved. The life path of the number 7 and the power of the Crow united to form CROW7.

The name invokes symbolism and magic for the 5 members. From the moment that the band came to life the members gave rise to their new stage names. CROW7 believe that light can only exist through darkness; the good in us lives in balance with the evil. The music of Crow 7 relates directly to this philosophy taking the listener on a sonic journey through the dimensions of good and evil in the world. CROW7 give rise to the meaning of hope for a better world in all they do. Their music is uplifting and captures the essence of this belief from the band. Just listen and you will hear the magic of CROW7 as it blends with your soul and takes you on a magical mysterious journey to new dimensions in time and space.

The bands debut album was titled “The Picture”. This was a pure studio project. The album received rave reviews and started to build the CROW7 army of fans. Full of melody and passion the album cemented the bands position in the world of hair metal and rock. The bands second Album packed more life and theatrics into the bands stage performance. Everything about “Light In My Dungeon” was meant for large spaces. CROW7 rose to the challenge and infused their own magic life force into every note on this album to deliver a body of work that is truly outstanding, emotional and extremely memorable. Taking elements of Bon Jovi, KISS, Def Leopard, Led Zeppelin and The Scorpions that band has given birth to what could possible become an iconic album in the decades to come.

CROW7 delivers a sound that could have easily been at home on the debut night of MTV when they launched in the USA back in the 80’s. They blend a 70’s rock with 80’s hair metal sounds with a touch millennium technology to deliver modern melodic millennium metal. The lyrics on “Light My Dungeon” express the abnormal thoughts of human beings, and delve into the dark corners of the soul but provide hope for a better future that there is always a way to escape the madness of this world, no matter how desperate the situation may be.