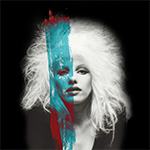 Dale Bozzio was the lead singer & creative pioneer of Missing Persons, one of the 80’s most provocative new wave music artists to hit the scene. Dale is a singer, songwriter, and fashion style conceptualist.
Dale, in the early 80’s, created a truly unique image and vocal style that would later go on to influence the likes of Gwen Stefani and Lady Gaga. Dale is still touring and has a very active solo career.

Dale worked hard throughout her early career with Missing Persons, and found herself at the top of alternative international music charts, on critics “Best Of Lists” and on concert stages. These places are where her distinctive voice, dazzling stage presence and unique image earned her a fervent following worldwide. After the band dismantled in 1986, Dale went on to release her solo hits such as ‘Simon Simon’ and ‘Riot In English.’

Dale has continued to lap up success by going on constant US tours, covering tracks to go on tribute compilations (‘Into The Groove,’ – Virgin Voices: A Tribute to Madonna Volume Two,) featuring on TV shows (NBC show Hit Me Baby One More Time,) and creating her own cover album (New Wave Sessions).

Dale Bozzio created an incredible body of work with Missing Persons in the 80’s. That music that defines everything that was the 80’s and all its fashion and glamour. Time has now come full circle making her more relevant today than ever before as the 80’s pop ballads are reworked and sampling is now mainstream artform.