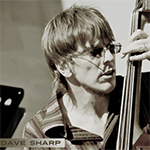 American bassist/composer Dave Sharp here presents us with some mysteries. For example, why is his group called the Secret Seven, when there are basically only four of them, although they are augmented by other musicians on several tracks. And why is the album called simply 7? Dave also gives us some puzzles about categorization, as some tracks – like Africano – seem to be salsa, while other tracks embrace jazz-funk, soul and various other genres.

In fact this mixture of styles is part of the CD’s appeal, as it ensures variety, which is accentuated by the number of different instruments used on the album. Most tunes were composed by Sharp and Chris Kaercher, who plays all kinds of reed instruments, including a bluesy harmonica on Chrispy Underground and breathy flute in Can I Be Your Squeeze? His tenor sax buzzes extrovertly on Skeleton Key, to which Chris McCall adds ethereal vocals. Keyboardist Dale Grisa adds to the fun by alternating between Hammond organ and piano, while drummer Eric Wilhelm hots up the action with his Latin percussion (which one suspects is sometimes overdubbed, as he manages to play drums and other percussion simultaneously).

I don’t know why the last two items are listed as “Bonus Tracks”, unless it is to justify the “7” album title. The radio edit of Africano is simply a slightly shortened version of the opening track, while Can I Be Your Squeeze? is an old funkfest with a boogaloo beat.

I can warmly recommend this album because it keeps your attention through its versatility, rhythmic drive and tunefulness. The Secret Seven may not be a secret for much longer.

Dave Sharp is a Blue Pie Records USA artist and published by Blue Pie Publishing USA (ASCAP) for the world.