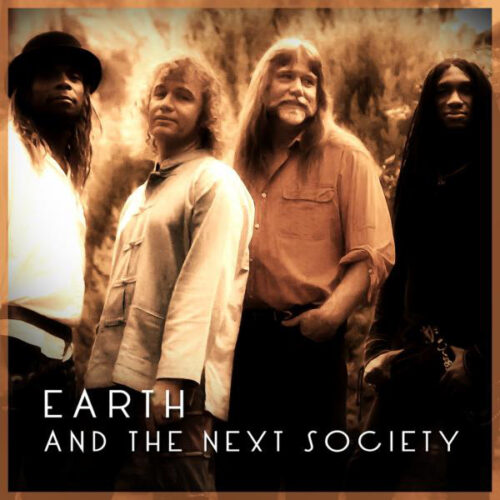 Earth & The Next Society

Earth and the Next Society is the creative project birthed by musician and songwriter Michael Shields. Created as a platform of expression and to provide the voice of reason regarding the issues that are currently relevant in the modern times of disorder and uncertainty.  Earth and the Next Society create music to remind us as human beings who all speak the universal language of music to look in ourselves and find our own inherit wisdom and act on it to help better ourselves as a society. This mantra quickly grew in popularity and Shields enlisted the help of an incredible entourage of fellow musicians that brought their own personal style to the collective, producing a distinctive sound that has its roots deeply embedded in the Golden Age of Rock music and beyond. Earth and the Next Society is comprised of Shields on vocals and lead guitar, Jimmy Mack on bass, David Bedell on drums and Tom McMillian on keyboard.

Shields’s musical journey began at a very young age, clearly fascinated by classical music as a child and decided to explore his vocal abilities and guitar shortly thereafter. As a teen, Shields became an integral member for a number of bands and at the tender age of 19, created his first major project ‘The Comets’. Described as straightforward Brit Power Pop, The Comets became a formative group that defined the college radio format, a seminal movement that heavily influenced the music scene that would ultimately flourish in the 1980s. Shields’s commented on his newfound radio stardom “I can remember waiting almost daily for the mail to arrive with chart lists from scores of stations playing our songs. It was seriously exciting stuff.”  The band continued to play live shows almost religiously as they continued to build a solid following. However, their lacking attrition started to become noticeable and at the bands peak of artistic effort, the three members including Shields were lacking the emotional fuel necessary to keep the collective together. Nevertheless, Shields looks back fondly on his time in The Comets “We were a three piece band, just guitar, bass and drums. But we accomplished quite a bit with the format. We never felt short on sonic vocabulary.”

It wasn’t until 1989 that Shields’s went on to create his next full musical creation “the Method”, a band based on Post Modern Rock aesthetics. He says “This project was a must for me. I had to do it. Had things to say, most of them about emerging ecological issues and topics but in many respects it’s an early insight into what would be the musical message that has become a life’s purpose for me.”  The sound of The Method brought a mixture of postmodern introspection and new age soundscapes that left Shields often compared to the pioneers of alternative pop rock, David Bowie and Peter Murphy. He notes that “The Method sonically was textural; I can go into hours of explanation as to the modality of the creative process with the band. It was not by any means a guitar band, but rather an amalgam of all instruments sonically embedded into layers of texture. It often was difficult to discern guitar from the keys. The voice on top of this textural environment was the focal point. “  Due to ongoing frustration in the band regarding musical creativity and varying approaches, Shields left the band as his interest waned.

Perhaps deterred by his turbulent time in The Method, Shields began work on a new solo album in 2001,only to decide to not release the work and ultimately shelve his latest material. However, as years went on Michael began evolving a musical identity that would bring his musical voyage full circle. “I went right back to what got me into playing music in the first place. Classic Rock influences that were just dying to get out if you know what I mean.” Michael conveys with the wryest of smiles. The result, “Earth and the Next Society.” “This project feels more natural to me than anything I have ever done. Its sounds that way to me as well. It all just came together, finding the right players, creating and developing the material it all seemed right. “

On board with Michael Shields’s creative ensemble is bassist Jimmy Mack. An accomplished musician in his own right, Mack has performed and recorded with the musical legends of his time including Sly and the Family Stone during the mid 70s and for four years toured nationally and international with Edwin Starr And Starrchild in1978 to 1982. Mack went on to tour with Hiroshi Takabo in Japan as a piano/bass duo, remarkably selling out every performance. In 1984, Mack began collaborating with Christian and Soul music great Jon Gibson. Recording and touring together for four years, they recorded the albums “On the Run” and “Change of Heart” with M.C. Hammer making a feature cameo. Both records produced number one hits on the CCM charts. Mack performed a number of times on the tour for “Change of Heart” with the most notable performance when for the first time, M.C. Hammer yelled out on stage to the audience “I need some help from my ace, Jimmy Mack on bass!” Since that crucial performance, Jimmy has been known as “jimmy Mack” ever since.

Continuing to record and tour through the years, Mack highlighted that one of his proudest moments was performing with Richie Havens at the original Woodstock site for the Bethel 25th anniversary Woodstock concert. Cementing his rock legacy, Jimmy himself was inducted into the Arizona Blues Hall of Fame in 2004 for making a lasting and substantial contribution to blues culture. At his induction, Jimmy was described as “a living blues legend.” Jimmy joined the Earth and the Next Society in 2011, continuing to contribute to the music scene he maintains so much passion for.

Joining Shields and Mack is David Bedell on Drums. A professional drummer, instructor and recording artist, Bedell quickly realized his life’s calling at the age of 7 and has pursued a career in music ever since. Because of his incredible talent and fervor for his craft, David has played venues all over the world including dates in China, Brazil, Japan and Bahrain. Appearing in a myriad of rock magazines including Drum Magazine, 22nd Century Rock and Metal Edge and with a number of video performances to his name most notably MTV “Headbanger’s Ball” and Fuse Mobile, David has found a home for his talents as an vital member of Earth and the next Society.

Rounding out the quartet is Keyboardist Tom McMillian. Tom initially gave up his pursuit in the music industry to follow his other passion, working with troubled teens. He then started his professional ‘day gig’ as a licensed marriage, family and child counselor. But as it is for most musicians, their passion for music will always be their calling. Tom explains, “It was as if I woke up one day realizing that some part of me was missing”. So in the early 1990’s, Tom began his quest back to live performance. Now, as a two-time nominee for the Arizona Blues Hall of Fame, Tom has joined forces with Earth and the Next Society, “It is as if I have come full circle”, Tom says. “I must be one of the luckiest people alive. To be a part of an original neo classic rock project that embraces what I do, with the instruments that I play, and with the calibre of talent involved, it just doesn’t get any better than this.”

Earth & The Next Society are distributed digitally to the world by Blue Pie.