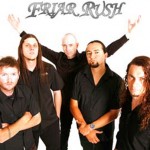 Friar Rush are a melodic progressive power metal band from Sydney, Australia. They’re adored by their fans, praised by their counterparts and you’ll know exactly why when you listen to them, especially if you have the chance to see them play live! They were formed in 2003 by Justin Brockbank. The band’s line up was set months later, comprising of Justin Brockbank (vox/guitars), Andrew Najdek (guitars), Guy Walton
(Keyboards), Alcides “seed” Stowe (drums) and Troy Madden (bass). The band relentlessly performed around the Sydney metropolitan area for the next year or so with great success.

In 2005, 16 year old, up and coming guitar virtuoso Kirin Han was selected to replace Andrew, whose duties as part of Switchblade began to conflict with those of Friar Rush. As the year came to a close, the band decided it was time to give the people what they wanted – an album! Friar Rush kicked off the recording process late 2005, and a year later, released their debut album entitled ‘Alauda Sonare Suavis’ – a mixture of Scandinavian and European influenced power metal and good old Australian aggression!

Guy Walton left the band to pursue other musical interests and Rob Bisset joined the fray in 2006 to take over the role of keyboardist. With their debut album completed, the band in it’s latest carnation wasted no time and has since finished writing material for their follow up album ‘Still Alive’ which released back in 2015. In early 2007 Kirin decided to leave and Justin asked Andrew to join Friar Rush again and he happily returned to the band. “It just felt right to have Andrew back.” – Justin

Friar Rush is bringing it’s winning combination of Power Metal’s hard hitting edge, tones of classically trained voices, epic strings, killer keyboard and super fast and technical guitar riffs to the table and are impacting the metal scene like no other band can. Now touring relentlessly across NSW and VIC under the watchful eye of Manager Anita Donlon (MMF) Friar Rush are showing fans new and old the power of a band with talent, experience, passion and a unstoppable energy to rock and play great music.