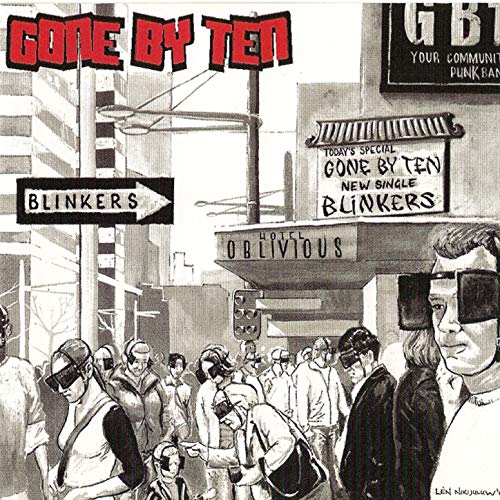 GonebyTen was formed a few years ago in Sydney Australia. Starting as A 3-piece act GonebyTen played a lot of shows and soon earned the reputation of being a very tight and energetic act. The guy’s collective supports over the years include; Grinspoon, Guttermouth (usa),59 Times the Pain (swdn), Chixdiggit (can), The Hard-ons, No Grace, & 28 Days.

Over The Past Year GonebyTen has kept a lower profile as they’ve re-invented themselves – Turning From A 3-Piece into a 4-piece, and then into a 5-Piece Band. Now Ready and armed with a sharp set-list of newer songs and older favourites GoneByTen are set to take on the big-guns with their powerful blend of melodic-fast-rock. In early 2006 – GonebyTen entered the studio and recorded their second EP titled the ‘Blinkers’ EP – which the band is getting ready to launch with heavy touring and hopefully some Triple J airplay (wink wink, nudge nudge).

The ‘Blinkers’ EP shows Gonebyten’s versatility and boasts much better song-writing & performance skills than their first ‘Self-titled’ EP. The EP tackles a range of lyrical topics ranging from Obsessive relationship (‘Back Off’) to Having a Pub in your school (‘Theres A Pub Now In My School’), and also dives from pop-influenced Punk-rock (‘Blinkers’) into more metal-influenced Punk (‘The Other Side’) then onto full-blown Double-kick/guitar solo mayhem (‘Here I am Today’), all songs manage to deliver a catchy sing-along chorus.

At the start of 2007, Paul Left the band & Gone By Ten went back to being a 4 peice. Less band members has however turned out to be a positive thing, with Gone By Ten sounding tighter than ever. In a scene today where honest live-acts almost seem exstinct, and pretentious hair-styling/rock moves rehersed in front of mirror seem to be taking over .

GoneByTen are here to show you that a band can have good commercial value whilst still blowing you away at a gig. Check them out and you won’t be dissapointed. For more infor on GoneByTen, visit their myspace page at www.myspace.com/goneby10.