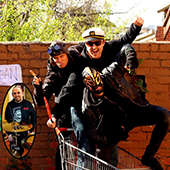 ‘I Am Duckeye’ is an energetic and quirky, comical punk band! The awesome foursome from Melbourne is described as an, “Australian train wreck, rock band that are making massive amounts of minus-money in the music industry since 2008.” ‘I Am Duckeye’ features Matt on lead guitar, Sam on back-up guitar and vocals, Jules on bass guitar and back-up vocals, and Sean on drums (because that’s all he’s allowed to do.)

“We have done stuff for many years and no budget has been harmed in the making of said stuff. When touring interstate, we mooch off friends with couches and do dishes to cover board. We know how to build our merchandise into a stack for the brave punters to frolic in after our train wreck shows! We put our music online to buy in over 100 stores!”

I Am Duckeye was formed when brothers Sam and Matt decided to form a side project to their additional bands, ‘Chico Flash’ and award winning ‘Sydonia’. The brothers choose to join forces and combine with Jules and Sean (Jules from ‘Dirty F’, while Sean also from Sydonia) to blow audiences away with their unique brand of punk induced rock n’ roll!

The foursome began writing catchy and classic riffs with spontaneous and sometimes bizarre lyrical content, which takes you back to the days when punk legends ‘The Sex Pistols’ reined the charts and billboards across the world!

They decided to name themselves I Am Duckeye! Guitarist Matt, from his childhood days, chose the name. Matt would say the words “duck eye” and point to anything and everything as being a duck eye.

Years later, brother and vocalist Sam suggested it would be a great name for a band, with drummer Sean piping up in agreement. The moniker ‘I Am Duckeye’ was created.

I Am Duckeye is now featured on the Triple J ‘Unearthed’ site, and has reached number four in the charts on the ‘Sign Me To Roadrunner’ official pages for their 2nd comical DP (EP and DVD) ‘SHUTUPAMINUTEFORASECOND’.

They have also had their fair share of success with the audience, stating, “We had our single launch the other night and during one of our songs, a pretty girl in the audience flashed her boobs. I don’t care how many gigs you’ve played, what stages you’ve played, who you’ve supported, what size crowd you bring; you haven’t really made it until someone feels the need to pop out their norks and give ‘em a wiggle.”

What do you really want from a good band? A great night out where you can let loose, yell some nonsense at the top of your voice and wander home with a head full of musical ear worms to annoy the crap out of you the next day! ‘I Am Duckeye’ offers this, so it is no wonder that they are making a huge mark in the scene, with no sign of letting go!

I am Duckeye is a Blue Pie Records USA artist and is published by Blue Pie Publishing USA (ASCAP).