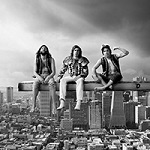 The Naïve New Beaters are a French pop band from Paris, and Blue Pie Records work with them on selected titles.  They’re an artist coming hot off Capitol Music France‘s press, and they’re an artist with Cinq7. Blue Pie are honoured to be able to support the Beaters as they bat a thousand in the French music industry!

The trio’s journey started with a “Bang Bang”, their first publicly recognised track turning heads on Youtube in the mid 2000s. It was a story of internet stardom during the decade in which we were discovering what a “viral video” truly was, and the clout they got from it is enough to set your head spinning!

Most will know their distinct hybrid sound from the Nokia commercial featuring their track “Live Good”. With a fusion of rocking, rapping, and the futuristic zaps of their electro house combo, the Beaters got the world’s attention. Who’s to say how many ringtones were changed to feature their track that year?

From there, the band featured their magic music in all kinds of properties, everything from the iconic “Can’t Choose” featuring in NBA 2K10…

…to the trio backing up the legendary SMASHING PUMPKINS with their infectious style!

That’s why it’s no small privilege for us at Blue Pie to be able to support the Beaters, and the fact that Cinq7 and Capitol Music France have teamed up with us on this is something which we’ll always be grateful for!

The Naïve New Beaters are a unique band with a feel-good upbeat style that will make you smile in a bleak world. They’re just what you need if you just wanna shake it out and love life again. Distinctly French and living their life under the mantra of pure passion, their music is one of a kind, and we’re glad we’re around during their prime!

Check out the Wikipedia entry for the Beaters for further info and sources.

And check out the trio’s website while you’re at it, for all sorts of quirky music and further fun on the horizon.