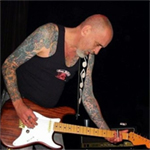 Pete Wells was the genuine 100% proof rock‘n’roll outlaw. Often described as Australia’s version of Keith Richards, he first came to fame in the early 70’s playing bass for the now legendary BUFFALO. BUFFALO were heavy, and Pete’s bass playing was like Bill Wyman on rocket fuel.

The BUFFALO experience gave Pete an insight into what was missing on the Aussie rock scene, so at the end of 1976 he left the band, put down his bass and started playing slide guitar. Pete then teamed up with ex-BAND OF LIGHT bass, Ian Rilen, and later ex-BUSTER BROWN throat, Angry Anderson, to form a tough street band with some serious attitude. You know the band, the mighty ROSE TATTOO.

What can we say about The TATTS that hasn’t already been said? They were one of the best bands ever to tread the boards on stages around the world! AC/DC gave the world a taste of real Aussie rock ’n’ roll, and THE TATTS cemented the greatness of that era. The years may have flown and the band may be a thing of the past, but age has not dulled the fire in the belly of the beast. The world still shouts out for ROSE TATTOO, and their albums are as popular as ever – something that we’re sure the boys would be glad to know. The TATTS released a live album in 2000 which was very well received, as fans were hungry for a new release from the boys. Early 2002, The TATTS entered the studio to to record their first studio album for some 20 years. The boys were apprehensive about doing a new album, but the pressure of the fans wanting new songs, along with the lack of true rock ‘n’ roll being released was just too strong a temptation. The result is an album titled “Pain” which sees ROSE TATTOO at their blistering best, so don’t worry about the band losing it, the new songs are just as good and as powerful as the old shit! Funnily enough, this album is their best selling album!

After leaving ROSE TATTOO in early ‘83, Pete put together and played in various bands before teaming up with Lucy DeSoto in ‘85. Pete & Lucy wrote some great songs together, and in 1990 Pete released the first of a number of solo albums. As a warm up for the ROSE TATTOO 2001 UK/European 7 week tour, PETE WELLS, ANGRY ANDERSON & THE DAMN FINE BAND hit the pubs and clubs in NSW, and also saw them traveling to Tasmania & South Australia. Their stomping blues covers packed out the venues, and as a result of their success, a CD was released later in the year which sold heavily.

January ‘02 saw Pete release a purely solo effort and the title reflected this as it was simply called “Solo”. Pete played all the instruments on the album and indulged in his love for acoustic blues which saw him doing both old & new Wells/DeSoto tunes, as well as covers from some of the old blues masters. He is fondly remembered for all his exploits and for all the hardcore rocker bands he ran with, and we miss him dearly: the world of Aussie rock just isn’t the same without his killer skill! For more info on why the world loves Pete Wells, check out his online catalogue!