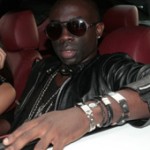 Since Sam Sarpong was a kid, he could remember standing in front of the television watching LL Cool J, Will Smith, and P Diddy perform, knowing one day that would be him. At age 11, he started composing songs and performing at school plays, where he would incorporate his music.

In junior high and high school, Sam was voted most talented of his class and gained such a reputation for performing. As a sophomore in high school, CBS’ news anchor Dan Rather came to his school and did a feature on him. After high school Sam and his childhood friends, Mike, Kasem, and Keyvous all formed the group The League. With the help of MTV Asia’s VJ Kasem, son of legendary radio personality Casey Kasem, the group was touring with the Levi’s/Reebok music festival, with sold out shows all over Asia. The League went on to score six platinum albums since the year 2000, including the 2010 best-selling album Altar Ego. The #1 chart-topping single “Get it” was one of the group’s six Top 10 singles. They have appeared on over 40 TV shows, films, and soundtracks such as Scary Movie 5, Carmen, the Hip Hopera, Love Don’t Cost a Thing, Johnny Was, and the popular VH1 show, Hit the Floor.

Sam was a very successful solo artist touring all over the world from 2011 to 2015 building his fan base. He has performed in Dominican Republic for MTV’s Spring Break and DJ Spinderella’s daughter’s MTV My Sweet 16. In 2013, he was one of the main acts performing at the Notting Hill Carnival in London, one of the biggest music festivals in the world with over a million people. Some of his performances in 2014 included a basketball half-time show at Staple Centre and shows at House of blues and Hard Rock Cafe Los Angeles.

Sadly Sam is no longer with us, and he is now resting in peace with all our love that we can send to him and his family.