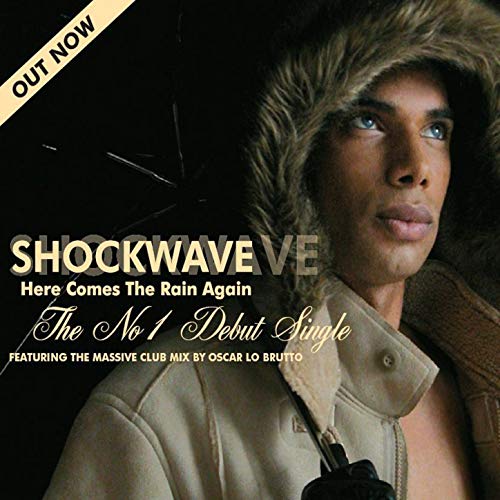 Born in the capital city of Phoenix in the state of Arizona and thriving with motivation at the young age of 10, this artist knew that he had what it took to be a “Somebody”. His name its-self is a nickname given to him as a young child after playing with a hair-holding pin in an electrical socket. Luckily for young Shock, the voltage in America is only 110 volts!

Some say this is what jump-started his creative mind and crazy antics….

His very first release as a dance artist, Shockwave brings a quality entirely of his own to the Eurythmic’s original pop classic “Here comes the rain again”. The single has debut in 14 countries with no intention to slow down. Shockwave is ready to take the stage with his powerful vocals and present a high impact show with his dancers.

With the encouragement and assistance of his childhood photography teachers Angie Dimaggio and Sue Wright, Shockwave was shaped and encouraged to pursue his passion of becoming a “somebody”. He gained professional dance lessons from a /choreographer named Kim Dorsen who was aquatinted with Paula Abdul at the time; this would prove to be very beneficial for the future.

Not many can say that they have had the chance to work closely with their idols. Prince was the first celebrity he had seen in concert and eventually was lucky to later work with him. His first high profile appearance was in Los Angeles on a few music video shoots that led him to work with Michael Jackson on the set of Disney’s 3D spectacle Captain EO that was directed by George Lucas and Frances Ford Copula.

A close friend then introduced Shockwave to a representative named ‘cookie’ who had ties with the force behind the success of the rap group ‘Salt-N-Peppa’ and R&B group ‘Ready For The World’ who had big success in the 80’s. Cookie being an up coming musician himself collaborated with Shockwave To write his first 2 original tracks entitled “Ladies in the world”, a rap number and “I don’t want it” an R&B/Dance number.

At a time when hard rap was transforming – a new style of Dance/R&B was fast becoming popular. SHOCKWAVE had found his place in the world of music, which has led him to open for such acts as New Shoez, Young M.C., Stacy Q, and Mary Wells, (former supreme with Diana Ross).

Shockwave has also been a model with Ellite and Cassablancas in Los Angeles. He has done Catwalk/runway spots for D&G, DKNY and Ralph Lauren. He has appeared in G.Q., Vogue and Madame Moiselle and various other magazines around the world and has been at the top of the fashion scene for a number of years.

He has appeared in television and motion pictures. A few of his many spots include “Independence Day”, “The Fan”, and “The Matrix”. Televisions “Silk Stalkings”, “Kindred: The Embraced”, 3 seasons on “Nash Bridges” and the daytime soap “Sunset Beach”. In one year he appeared in 4 national television commercials and appeared in the music video “Backstreets Back” along with dance work with Christina Aguilera & Destiny’s Child.