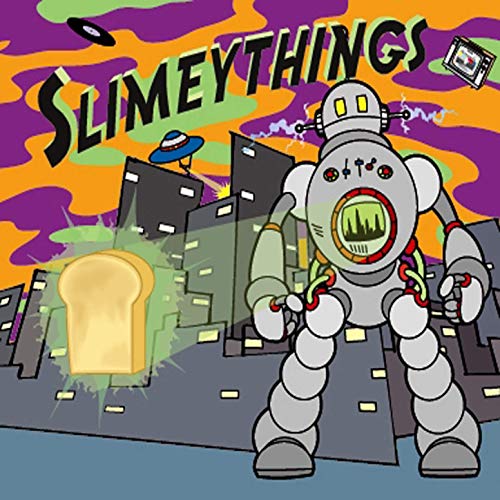 SLIMEY THINGS, Australia’s most amazing sci-fi pop band, were first sighted in the venues of Sydney’s underground in 2001. This sextet of pseudo-pop psychos have a reputation for their infectious music and memorable, “seared into your brain” live performances.

Their unearthly sound is and energetic blend of catchy pop, futuristic 80s rock, sci-fi movie soundtrack music and zany cartoon sound effects. Unearthed by enigmatic front man and composer Nick Soole, SLIMEY THINGS have received much acclaim as one of the most unique and important acts to emerge from Sydney.

With widespread radio airplay and their new SPACETOAST EP now available, it seems only a matter of time before the catchy rhythms of SLIMEY THINGS cannot be contained and breach Earth’s puny defences.

“The Slimey Things are the most consistently entertaining live group I’ve ever seen, and I ’ve seen them over ten times. Their music is so fantastically warped, but also contains some of the most infectious melodies amidst the madness. Combining pop, surf rock,sci-fi and even 80’s electro, their diversity could easily have them playing alongside anyone from Fantomas, to Deerhoof, to Anticon’s Why? I’d just love to see what front man Nick Soole can come up with in the studio.”  – Andrew Levins, FBI 94.5FM

“These guys have it… And the crowds know it. They are one of the best entertainment value acts around.” – Stuart Tabrett, Magic Blue Media

“The best pop since DEVO blew the world away in ‘81.” – Damien Reilly, CEO of Blue Pie Productions

“These guys are from another planet.” – Paul Searles, Producer

“The fastest growing band in this country unbeknownst to some.” -Jaimie Leonarder, SBS TV