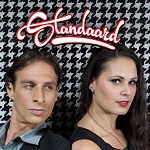 Since their formation in 2016, STANDAARD have been working on building their funky repertoire. Standaard are from Amsterdam in The Netherlands, so the primary focus in their music production was on Dutch funky and groovy pop-productions. Their music is influenced by artists like Daft Punk, The Parcels, Jamiroquai and Kraak & Smaak. Their distinct sound, a mixture between disco, late 80’s and 90’s club music, but with today’s vibe, is making waves in Holland lately.

A lot of fans and also radio stations were asking for a new funky track in English, with the recognizable STANDAARD vibe that they love so much. The first English track released was ‘Without You By My Side’, in March 2018. Again the groove, funk and upbeat danceable vibe were unmistakably STANDAARD, but the English translation made it accessible to more listeners worldwide. The reactions to this first English release were very enthusiastic both from fans and radio stations in the Netherlands and abroad. That’s why STANDAARD decided to release another English track later that year!

‘One In A Million’ was the second English single. It was a very catchy and upbeat track with a summertime swing to it, together with some Latin influences and a funky twist of the 90’s. These elements, combined with the catchy lyrics, make this a groovy and danceable feel-good song!
The song is about finding the perfect match in love and life, fighting for it, and cherishing it in all its shapes and forms. Brought with a warm summertime vibe, the song has a catchy vibe to it, with a twist of now and the 90’s.

‘For 2019 we’ve already got six or seven tracks ready to be released, both in English and Dutch’, says Rosita. ‘We’ve been producing new songs on a regular base since the start of STANDAARD and we plan to continue doing so’. Always a good and satisfying feeling to know that you have something to choose from. ‘Lots of funkiness and dancy sounds coming up in 2019’, says Philip.

In music production, STANDAARD has formed a team with executive music producer Roeland Ruijsch from Roermond (Netherlands) from the beginning. He is an indie musician and very pleasant to work with. ‘He always manages to finds the right translation and musical framework of what I have in mind’, says Philip. ‘And that’s one of the reasons our partnership is worth so much and very fruitful’.

Philip is an energetic and dynamic singer-songwriter with a different background in consulting and HR. Three years ago he made a drastic career move and followed his heart and passion to the world of music and entertainment. With his presence and flair he brings energy and power on stage.

Originally a dancer, Rosita is a passionate singer who lives for showbiz and performing. Besides being in STANDAARD she has her own cover band and sings on different occasions. With her strong personality and flamboyant appearance this power lady radiates on stage, her second home.

More English (and Dutch) tracks are waiting to be released in 2019. Each one even funkier and more danceable than the other! STANDAARD: a new catchy and funky sound in pop music.