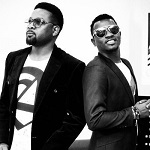 Meet Styl-Plus! A Nigerian R&B and pop musical group/quartet that has quite a history behind it. The founding members were Shifi Emoefe, Tunde Akinsanmi, Yemi Akinwonmi, and Lanre Faneyi, the name STYL being an abbreviation of the founders’ first names – originally, Styl-Plus was simply known as STYL, a Gospel Quartet. In 1998 Lanre Faneyi died, and Zeal Onyecheme joined the group. The name then changed to Styl-Plus, the “Plus” being used to indicate the new addition to the group. In the year 2001, the group expanded from singing strictly gospel songs, to inspirational and love songs. In 2002 Yemi left the group to pursue another career. In 2003 the group teamed up with Anthony ‘T-Jazz’ Ukpong and Joseph ‘Joey’ Ukpong to form their own record label;  Styl-Plus Music.

No matter who’s at the helm, it’s always Styl-Plus, and always in the playlists of many! With blockbuster hits such as “Olufunmi” and “Imagine That”, the tracks that Styl-Plus have made and will surely continue to make are always guaranteed to satisfy. In late October of 2003, under the management of T-jazz and Joey, they released two singles to radio stations. The response was tremendous, and the unprecedented airplay the tracks received fueled the subsequently massive sales of the CDs and audiotapes of the singles. Based in Abuja, FCT, the group uses its strong vocals and addictive soundtracks to successfully blend together English and Indigenous languages, on their Pop and R&B tracks. The motto of the group is “Positive-Cultural-International” and this is evident in the positive messages and the noticeable absence of raunchy and profane lyrics, which characterize most R&B groups. The members of the group are all graduates of FUT Akure, and are all bachelors in their twenties.

Whether they’re a group or a duo, and whether the members are the modern ones, or the classic ones who have moved on or passed away… there’s nobody as iconic as Styl-Plus, and nobody quite like them!