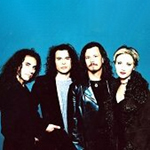 “The Baby Animals” are a modern rock band that scored their first gig at the infamous Kardomah Café in Sydney in the late 80’s and continued their musical journey playing in clubs and pubs throughout the city. Suze spent four years writing and recording in England where she was approached by a record label, which at the time wanted to turn her into the newest manufactured pop act. Suze being a girl who thrives off the energy of a live band wasn’t having any of this, so she returned to Perth and decided to form her own band with the guidance of then manager John Woodruff. First she approached fellow musician Frank Celenza who plays the drums for “ The Baby Animals”, he recommended his best friend bass player Eddie Parise then followed by guitarist Dave Leslie.

Soon after their first tour of Sydney the band signed a publishing deal with SBK Songs (now EMI Songs) and signed to Terri Ellis’s record label Imago Recording Company. Terri was blown away by the talents produced in their live show and commented that Suze clearly had that indefinable magic that separates an every day singer to a superstar.
The band flew to New York to record the debut album, and together with expatriate Mike Chapman (Sweet, Pat Benatar, Blondie) and Kevin “Caveman” Shirley (Aerosmith, Silverchair) produced a classic debut album. Their debut single “Early Warning” reached top 20 on the Australian singles charts and the band flew to USA to showcase their music for the industry reps for Imago and BMG. In 1991 “The Baby Animals” self-titled album debuted at number 6 on the ARIA charts and spent 6 weeks at number 1, they went 8 times platinum and became the highest-selling debut Australian rock album of all time until “Jet” released their album 12 years later. They topped 800,000 worldwide and played over 800 shows globally.

Bryan Adams was so impressed by Baby Animals he invited them on his European tour and whilst overseas they scored “Best New Act” at the inaugural 1991 Australian Music Awards. The band played for sell-out crowds at the “Let Go Of My Ears” tour around the country. In 1992 they joined the Black Crowes on a national tour of New Zealand, made a guest appearance on the David Letterman Show performing their single “Painless” and then went on to support Van Halen on his tour “For Unlawful Carnal Knowledge”.

“The Baby Animals” picked up a number of Aria’s including; Best Debut Album, Best Single and Best Album. Suze DeMarchi was also nominated Best Female Vocalist. Australian Rolling Stones Magazine placed Suze on the cover which was the first time ever they had put an Australian artist or group on the cover on the merits of a debut album. Although the band insisted to have a group shot on the cover or non at all, The Editor used its letter in the publication to explain why only Suze was used.

In 1993 “The Baby Animals” released their second album which hit #2 on the charts. They recorded “Shaved and Dangerous” in the Bahamas at Compass Point Studios (AC/DC) and it was produced by Ed Stasium (Ramones/Living Color). They continued to LA where Nuno Bettencourt contributed his songwriting and guitar skills on tracks “Because I Can”, “Life from a Distance” and “Be My Friend”. The band was on the verge of their first US tour when Imago Records folded. It lost its distributor BMG and there followed a break from touring and a break from the band.

During the break Suze released her first single as a solo artist “Satellite” which was on her debut solo album “Telelove” through Mushroom Records. She went on to write with Andrew Farriss, performed with INXS and in 2004 was inducted into West Australian Music Industry Hall of Fame.

Fast forwarding to more recent events, Dave and Suze recorded an acoustic “Baby Animals” album in 2007 with Justin Stanley producing the tracks. Several songs on the album appeared on Miramax/Disney’s film “Smart People” starring “Denis Quad” and “Sarah Jessica Parker” and later that year “The Baby Animals” reformed to work on new material for their re-release of “Baby Animals” and “Shaved and Dangerous” as well as “ll Grande Silenzio” for Liberation Blue. They have been touring the country again to keep the fans at bay and after 13 years they still know exactly how to rock the show!