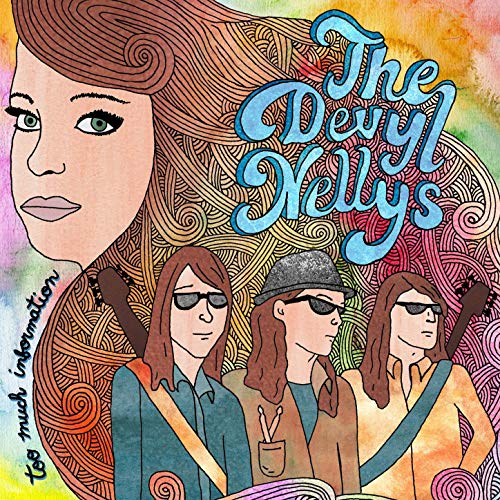 Nelly Levon and The Devyl Nellys

Blue Pie is very happy to tell you the story of Nelly Levon and her Devyl Nellys. The story began early in childhood… Somewhere between the Legwarming, Members Only Glamorous 80s… The 180 About Face of the Greasy, Disheveled 90s, And serendipitous movements since then.

The Devyl Nellys weave a grooving web of funk and soul laced up with just the right flecks of sparkly pop and rock. Listen to one of their songs and just try to stand still – you won’t be able to. When you see them play, you’ll have a great time without even trying. No other band enjoys themselves more than this New York City and Philadelphia based, six-piece celebration of all that’s infectiously good about music.

In 2011,  after writing songs for Interscope, Mercury, and Relentless Records recording artists, lead vocalist Nelly Levon introduced her bright pop choruses and witty, profound lyrics to the dancey rythyms, moving tempos and tasty guitar licks crafted by guitarist/vocalist Max Lopez, bassist Ben Scott, keyboardist Will Kienzle, drummer/vocalist John Roccessano and backing vocalist Aja Nisenson and The Devyl Nellys were formed. A true live band, they have played over 120 dates in 2014 and will have played over 180 dates by the end of 2015, including taking the stage at festivals, colleges, universities, various music venues, radio stations and in the NASCAR Coca-Cola and the NHRA Mellow Yellow hot rod Summer Concerts Series.

They’ve rocked many an enthralled crowd at venues like the Southland Ballrom in Raleigh, North Carolina and the Double Door in Charlotte, North Carolina. Audience members witnessing the Nellys throw their hands in the air and let it loose as Nelly commands percussion and John pounds out a masterful drum solo. The Devyl Nellys have toured with Bobby Bare Jr, Marshall Crenshaw, Red Wanting Blue and Yo Mama’s Big Fat Booty Band. As DJ Trevor Power from WNTI and WRNJ Radio Stations puts it: “The Devyl Nellys put on a fun, funk, jam like no other.” Their major debut LP “Too Much Information” engineered at Blackbird Studios in Nashville TN by John McBride and at Retrophonics Studios in Saint Augustine FL by Jim Devito, dropped in April 2014 on Mondo Tunes / Universal Music Group (UMG). It has landed these bohemian funksters on the radars of the alternative and jam music scene. The Devyl Nellys are truly a band for these complex times.

Their songs shine a light on dark, low points in modern living and loving, while offering rhythms, rhymes and laughs to help us all cope through it. They will release their second album in April 2016, engineered at Blackbird Studios in Nashville TN by John McBride and Vini Miranda. John Oates, of legendary hitmaker duo Hall & Oates and fan, friend and guiding star to The Devyl Nellys … Upon hearing one of their upcoming singles “Baad Seed” raved: ” ‘Baad Seed’ is BBAAAADD. LOVE THIS Tune. Looking forward to the rest of the album!” The Devyls’ music has been placed in key television spots: Discovery, Lifetime, ESPN, FX, NFL Network, Super Bowl Week, Super Bowl, NASCAR and NHRA Hot Rod.

Their music has appeared in the films The Fast and The Furious 6 and 7, on the NASCAR Official Soundtrack and Video Apps (2014 and 2015), NASCAR Members Club (2014 and 2015). NASCAR Video PS3 / XBOX 360 / PC Soundtrack (2014 and 2015) Including The Game Inside Line, Sprint Cup Series, Infinity Cup Series, Semi-Finals / Finals Championships Rounds. A funky, good time force to be reckoned with, The Devyl Nellys are the perfect band to shake yourself up with and get down to. May the funk be with you.