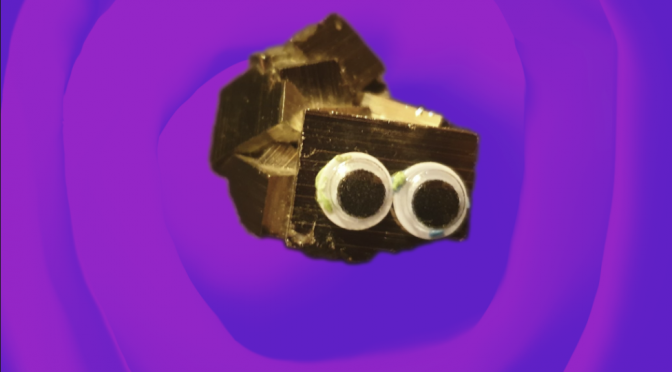 MC Pyrite is an anomalous rock who seems good as gold, until you get to know him. A pretentious wad of metal who smells of something ambiguous and stale, Pyrite features on our radio show because he made a nest in the studio and now we can’t get rid of him. He features with MC Mighty on the Blue Pie radio show.

As a younger rock, Pyrite often strengthened his hypothetical non-corporeal throwing arm, and won a regional qualifier for Basefootcrickball, a sport so stupid that it’s listed on Wikipedia as the only physical activity that tastes like stale jam and disappointment at a metaphysical level. Since this experience, Pyrite has taken to honing his skills by pelting eggs at anyone who passes by his nest, telling them to bugger off until they give him a microphone to be smug into.

Born and raised in a place that nobody cares about, Pyrite tends to his sand gardens in his spare time, hoping one day that he’ll also erode away into a fine powder and be forgotten. He boasts the skill of being able to master any competitive strategy game by making up rules in a manner so convincing that you’re charmed into believing him. [CITATION NEEDED] His favourite music is specifically Nightcore which has been slowed down into being normal music again, because even he’s not embarrassing enough for that.

Pyrite somehow combines a happy-go-lucky demeanor with a cynical and pessimistic outlook. The smirk in his commentary is audible, as is his punchable face. A man of contradictions, it begs the question how he can be so loud and have so little to say at any given moment. He thinks every song is the best song he’s ever heard, making his “commentary” thoroughly useless, however it’s great for feeble takes on free advertising. A well of words spouts from the individual who thinks he’s deep enough to contain the depth of the ocean, and this is no exception for Pyrite, who’s about as deep as the puddle of drool that’s oozing over his desk as he stares into space currently. But he’ll try and convince you otherwise.

Pyrite is an entertaining trainwreck to watch unfold, and therefore, he brings a special brand of schadenfreude to our radio show that’s wholly unique and helps bring it an “identity”. The only compliments we’ll allow him are backhanded ones, but to be fair, he deserves a backhand across the face in all honesty. At least someone wants to get their hands anywhere near him – it’s a rare occurrence, as he’ll probably tell you via radio in an attempt to make his pathetic life funny to ease the pain. Regardless, he’s here to stay on our show, so we might as well get used to him.