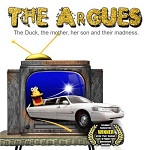 10 years of The Argues: The Movie!

Back in 2011, The Argues: The Movie hit the silver screen, much to the chagrin of all involved. Since the film was festering in the incubation tank since 2010, one year prior, one could say that 2020 is the 10 year anniversary! The future decade was bleak, and it was swathed by duck puppets. We’re hardly out of this yet.

Many have also compared this madcap adventure to watching paint dry, some even citing paint as more exciting. But hey, we enjoyed it! We also enjoyed silencing those who would oppose the new world order, led by our very own puppet duck, LEON SKANKS. Since this role, the puppet has enjoyed many successes in his career, eventually ascending to the figure we all know and love today: the omniscient God Emperor who rules over this modern dystopia!

With music supervised and a soundtrack created by Blue Pie Records, and with the film being distributed by Planet Blue Pictures USA, this film was an honour to work on. We definitely weren’t threatened by a sassy duck puppet, no sir. All fun and games and good movie times, happy happy happy!

The Argues The Movie is a story of how a son, a mother, and a duck named Leon Skank assault the Hollywood star system in an attempt to secure work through one of the biggest international actors’ agents in the world, Ed Tomato at ICU Management Los Angeles. However, things don‘t go so well! The ramifications of their approach to secure Ed as an agent result in a chase around the world and the World Wide Web after “Skanky”, David’s puppet duck, becomes the talk of the town. This is a story of remembrance, rehabilitation and outrageous situations that offer a bizarre insight into the world of showbiz and the struggles of an out of work actor. ARGUEably a funny, mad and eccentric trip! The film released on September 24th 2011, exclusive to Hoyts Theatres, and ran for one week.

After pitching the idea of the ‘take a pensioner to THE ARGUES for free’ campaign to the Prime Minister at the time, Julia Gillard, she responded: “That is a fantastic idea and a great thing to do. Congratulations!”

In honour of this milestone of ten years since the film’s successful (depending on who you ask) release, the official website for the film has been given an overhaul! The cast listing has been updated, and the film is yours to watch on major platforms, including Amazon and iTunes! With an all-star musical roster featuring Didge On Fire and TYZ, as well as that “unique” sense of humour that is so very Aussie, this iconic cult film is sure to settle any Arguments you might have regarding the underbelly of Hollywood. Soon to come are the Japanese and German dubs, ensuring that all across the world can be drawn into the inescapable void that is The Argues. Do not resist. This is a threat.

Didge on Fire and TYZ in particular owe some of their discovery to this film! The groups have been exposed (hopefully not indecently) by The Argues: The Movie, by the film team, and the Blue Pie media team, and they’ve been going strong both from this and upon their own merits. Their rocking music is part of what makes the soundtrack to this movie so memorable!

Didge On Fire & TYZ is distributed to the world digitally by Blue Pie Records. For more information on the film and the soundtrack, head to www.thearguesthemovie.com/index.php

Better do it quick, before you get yourself into a quacking nasty situation…

The Argues The Movie | Official Links: