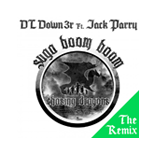 This remix from Jack Parry is one of the best things to come out of last year. DL Down3r’s iconic and classic banger is given new life, and Suga Boom Boom makes its way to even more EDM lovers – the last time this happened was when the Key Crashers did it, and we all know that was a resounding success. Jack Parry’s remix is no different!

But how successful is it, exactly? Well, one particular dance mashup video demonstrates that pretty well. Last week it had 4.4K views, and this week it has 10,772 views.

How many weeks has it been active?

People love the dance and they love the song, and who can blame them? Jack Parry’s magic touch was incredible, and the moves on display here are out of this world cool, and super authentic. And that’s to say nothing about the incredible original track that Jack Parry remixed, by DL Down3r!

The original Suga Boom Boom is a melancholy head-nodder, letting you into DL’s vulnerable side with a metaphorical discussion of his experience with illegal drugs. But this particular track adds another element that isn’t typically seen in remixes and covers of this track that tend to take it in a new direction: it remains relaxing. This identity of the track synergised well with the original, for while it was melancholy, it also had a bit of zing to it. It’s impressive to see a remix that is both chill and relaxing, and retains the spicy energy of the original, while keeping it distinct and different from the original – and that is exactly what the Jack Parry remix accomplished. The results speak for themselves, and we wanna congratulate Jack for the successful direction he took this in! When you hear the rest of his catalogue, it’s a given that this remix turned out as well as it did.

As for the OG… Through fierce and funky west coast rap, Down3r shares his prolific work with the rest of the world, and the stage with west coast rap legends such as Coolio, Brown Boy, Jay Tablet, Lil Young, Snoopyblue, Baby Bash, Steel City Hustlers, King Z and DJ Kane to name a few. From powerful messages, lyrical poetry and sharp comments on society, to G-funk and Trap/EDM hype songs, he proves that age and experience is the opposite of a liability in today’s rap game. Suga Boom Boom is the flagship song of his talented repertoire! This remix and the original are both out now on all major online retailers and streaming services, so get ready to buy a new pair of speakers!