This is a throwback for the golden 80s oldies, forever young through their rebellious and catchy music! The Blue Pie Studio has been busy lately, with Gabe Rizza working on remixes for Key Loch’s cover of Frozen, and his musical escapades don’t stop there: for over 2 weeks he’s been working to restore the master tapes of the one and only RUNNING BLUE band! In combination with the efforts of Kenny Everest, who extracted the tracks from the old 16 inch tape and cassettes, the dream came true and a vintage album was restored to Spotify, much to our delight!

This was a labour of love for our studio team, and it really shows the incredible work that Gabe can do when restoring archive recordings. Him and Kenny are no strangers to the console and it’s thanks to these efforts that we can now reminisce with ease! 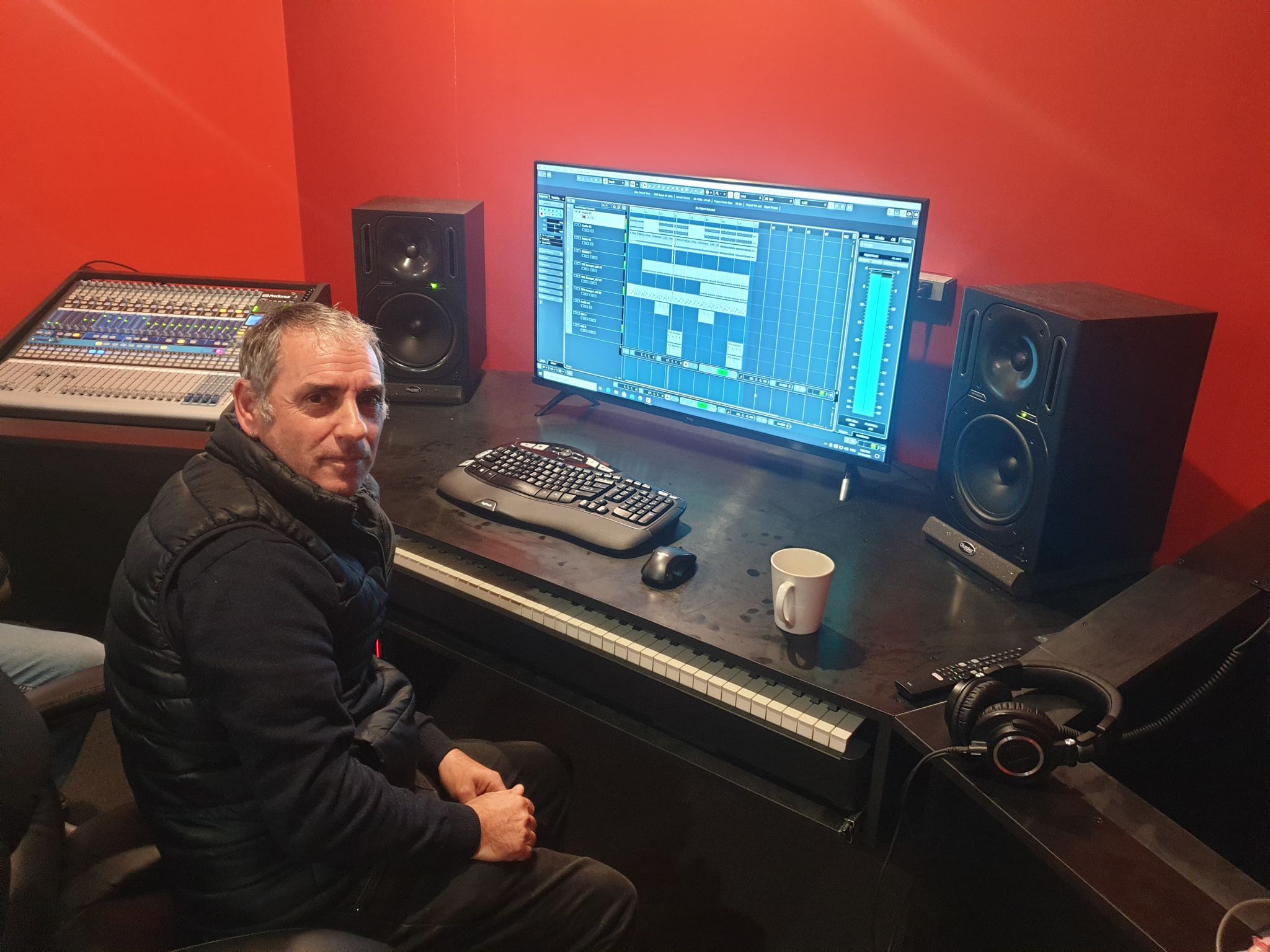 But what nostalgia do we have cooking on the menu today? If you haven’t heard of Running Blue, this is their story!

The genesis of Running Blue emanated from some jamming sessions that Alan Kennedy and Damien Reilly had just after leaving school in 1982. From 1982 to 1984, Alan managed to land a few acoustic gigs at the Briars Inn, Bowral. This historic location was a very popular local pub back in the late 70’s and early 80’s, and even now it still brings in the patrons!

Around a year or so later in heading into 1984, Damien got together to start jamming with Tim Williams, Kenny and David Frew. Rehearsing songs on the weekend gave birth to a few crazy tunes with gems like “Black and Blue” and “Respectable”. The song “Black and Blue” by today’s standards would not be a politically correct song to play, with lyrics about cracking a whip all over town. Tim Williams had a way with words.

But what to call the band? David Frew wrote down a few ideas at early rehearsal sessions, but eventually the name “The Zilths” sounded pretty punk and cool. That became the band’s first name.

From these early jam sessions it was clear that the band needed a singer. The call was put out to Alan Kennedy by Damien, and then things started to happen. It was not too long before Damien and Alan had penned 10 or so songs, and it was then time to get a proper band together.

Alan knew a keyboard player, Michael O’Grady, and through Damien’s connection to Peter Nathanial, he referred two of his friends Sam Kalos and Nando Pettinato for guitars and drums. The band was formed around the original songs that Alan and Damien had been writing, and regular rehearsals at Damien and Gerrard Studios from mid 1985. With the new line-up established, It only took a few rehearsals and the musical fire was well and truly lit, burning brightly!

After a few rehearsals were under the band’s belt, Sam Kalos submitted the band into the Sydney Uni Band Competition. The band’s first gig was as the Zilths. You can see the review from the bands 1st gig in the media section of the band’s official website’s media section. The review is from the Honi Soit mag, a Sydney Uni mag that covered the band competition and social events back then.

“The Zilths”, while a cool punk kind of name, did not really suit the band, so Alan ended up coming up with the new name “Running Blue”. With the band changing its name to Running Blue after the band competition, the boys went full-speed back into rehearsing. In a few short weeks, the band put together a 25+ song set, which comprised of mainly originals and a few cover songs. Running Blue then went on to leave their mark on the world, before drifting apart towards the end of the 80s. But as we can clearly see, that wasn’t quite the final chapter!

The second part of this time warp from 1986 is the band’s new and revamped website! Complete with bio history, song and visual media, and a whole lot more throwbacks than that, this is everything any self-respecting old school NSW music fan could ever want on Running Blue! www.runningblue.net

As we work our way through to 2022 and with Damien, Alan and Michael back in contact there, are new songs in the works. Who knows what will happen? One thing for sure is that the music will be great, original, and have exceptional vocals from Mr Alan Kennedy and some cool synth pop from Michael O’Grady with Damien Reilly at the production helm. Whether you knew them as The Zilths or Running Blue, there’s plenty of them to go around for whatever flavour you prefer! Between the promise of new music, the new website, and some revamped classics, we’re getting all we can out of Running Blue, and we’re loving it!
You can check out all the news on Running Blue at www.runningblue.net

Venues and Gigs:The band played throughout 1985 and 1986 at many venues across Sydney including: