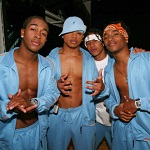 "Boys of the New Millennium" indeed- B2K reunite for The Millennium Tour!

Any 90s kids in the audience ready for some boy band nostalgia? B2K are back for this new era of music, and they’re accompanied by all stars such as Mario, Pretty Ricky, Lloyd, Robby V, Ying Yang Twins, and Chingy!

The tour schedule was announced on the 1st of January on the official Instagram, and it’s coming up soon for March and April!

That’s right, you heard correctly. The 90s favourites who ran with giants such as the Backstreet Boys and NSYNC have made a triumphant return to tour around America once again, and they’re sure to pull plenty of crowds just from the nostalgia factor alone. The Billboard interview on the subject certainly indicates that the beloved group will be received with open arms. “…the fans have consistently demanded a B2K reunion and, with the determination of an incredibly talented team, that dream is now a reality.” -Michelle Le Fleur, Omarion Worldwide COO What a beautiful kind of happy ending. From Pittsburgh to Louisville KY, the band’s unique sound will extend across the country and deliver classic hits like “Bump Bump Bump,” “Gots Ta Be” and “Badaboom” in show after show, performing their magic 25 times from March to April. See the schedule in the Instagram post above. Though that’s plenty of time for die hard fans to catch them in action once more, it almost doesn’t feel long enough, and we wish they could stay touring forever! But no matter how long they stay, they seem to be truly ready to make this performance a blast. Check out the electric energy in this rehearsal!

Need tickets?! Click here to go grab them from ticketmaster!

The 90s are coming back in a big way, and there’s nobody better to represent the era’s unique boy band sound than B2K! If you wanted to get a blast from the past, check out B2K rockin’ it here with Uh Huh!

Or if you’re more of a future music listener, Raz B may be the style you’re after, especially as he’s our DJ Central boss for China and one of the members of B2K! Check out some of his modern hits ever since the glory days passed- he’s kept the fire alive!

Whatever path of music you walk, you gotta admit this is huge and the 90s kids are sure to use their amazing memories that fuel their nostalgia to capture every single moment of this tour!