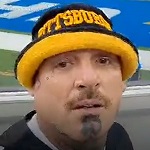 Pittsburgh’s Steelers tore up the field yesterday, and although they didn’t win, DL Down3r had the time of his life attending the match!

Those videos just say it all. DL is a superfan of the Steelers, and you can just feel the energy in those crowds! And we know that the team loves him… So if you guys like energetic crowds, we have a proposal. Let’s put it to a vote: who thinks that Down3r should feature in the next halftime show when the Steelers play? Show support by sharing this article and expressing that desire! Or if you needed a taster of his skill and style, check out this fun affair with the animated music video for Clown!

Or if you wanted to see him throw down for his hood with one of his ride-or-dies, check out Throw It Up For LA!

These videos make for a feel-good experience, and whether you’re a Steelers fan who’s gracious in defeat like DL, or if you’re humble in victory, everyone can unite in their love of the game or perhaps the love of Down3r’s unique music. Either way, we’re excited for the next game, and we’re sure that Down3r is too! Will we see him at the next match? Time will tell, but regardless, we’ve got a lot to be looking forward to. Just what the doctor ordered at the end of several rough patches, and toward the end of the year! We’re all charging out of the dark like a pro football player ready to play.

Through fierce and funky west coast rap, Down3r shares his prolific work with the rest of the world, and the stage with west coast rap legends such as Coolio, Brown Boy, Jay Tablet, Lil Young, Snoopyblue, LadyDice, Baby Bash, Steel City Hustlers, King Z and DJ Kane to name a few. From powerful messages, lyrical poetry and sharp comments on society, to G-funk and Trap/EDM hype songs, he proves that age and experience is the opposite of a liability in today’s rap game. Blast it loud, get ready to feel something, and rest assured knowing that hip hop never died!