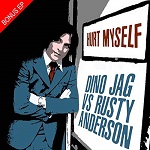 Don't Hurt Yourself by missing out on Dino Jag on ipluggers!

Early February is going to be a good time for fans of catchy pop rock! That’s because ipluggers is going to be promoting Hurt Myself to 35000 stations worldwide!

The track, produced by Damien Reilly, and featuring Rusty Anderson, Abe Laboriel Jnr, Brian Ray, and THE Sir Paul McCartney, is going to be blasted onto the airwaves soon! Imagine working out in the gym or doing your shopping and this starts to play. Pretty inconvenient, it’s hard to have to drop everything and start dancing. You’re welcome! Dino Jag’s tracks have that effect!

In the first few days of February, the track will be distributed to multiple radio stations across the world. And it’s not the first time it’s graced the airwaves either! Here’s an interview from Rusty Anderson, talking about the intricacies of his work!

With the help of Tony Hatch ,The Blue Pie production team was introduced to Rusty Anderson who was then the resident guitarist with the Sir Paul McCartney Band.  In 2001, Rusty Anderson got a call from producers Mo Jackson and David Kahne to play and sing on Paul McCartney’s studio album Driving Rain. This became the birth of McCartney’s widely praised band, which Variety called “as tight a unit as they come”. And that tight unit, as one could expect, produced some killer tracks, Hurt Myself being just one of them! The amazing remix work of Dino Jag has led to a catchy and groovy track, ready to take the world on!

Dino has produced a serries of remix projects with Blue Pie’s Damien Reilly. Together these two greats have remixed one of New Zealands biggest selling physical singles of all time “Shes a Mod”, Rusty Andersons “Hurt Myself“, featuring Sir Paul McCartney on bass, backing vocals and guitars and Australia’s singing legend “Mr Barry Crocker” and his song “Shine a light”.

As Damien Reilly says: “Dino is one of the best artists that I have ever worked with. He is quick of the mark with his ideas are always overflowing with infectious melody”.

Dino is gaining more and more world wide recognition and with names like this to his recording credits already the world is at his feet. Download Dino now from iTunes or stream these great songs from Spotify.