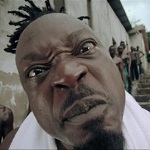 Recently we reported on the official lyrics to Eedris Abdulkareem’s monster hit, “Country Hard”. And a little after that, we also reported the lyrics to “Say No To Southern Kaduna Killings”. These two hits have been going really strong lately, and with the quality they exude and with the issues they cover, it’s little wonder that Eedris is seeing stardom from them! Since September, “Say No To Southern Kaduna Killings” has seen 41,252 views, and “Country Hard” has seen 235,695 views! While they’re both still going ever-strong, the Blue Pie Youtube Channel stats speak for themselves: “Country Hard” is a clear favourite! Here it stands, a new monument of Nigerian culture! Each of those thousands of views represents a Nigerian standing in support of Eedris’ message. Featuring the famous Sound Sultan and Eedris’ usual amazing talent, this music video pulls no punches and still manages to stand on its own merits, and it would even if there wasn’t a deeper message involved.

As we said before, this is a music video of a track from Eedris’ blockbuster album, Nothing But The Truth.

In what may well be one of Eedris’ greatest achievements, this album collects hits from Eedris new and old all together in one place. But as we can see from the reception of its music video, Country Hard is the standout piece from among the rest… but that isn’t to say that “Say No To Southern Kaduna Killings”, the latest blockbuster entry into the “Say No” series, is any less worthwhile!

A political statement regarding the inaction from Kaduna’s government in response to the recent raidings and havoc being wreaked upon the citizens, Eedris has never been one to shy away from making a statement, and this is one of many biting stances he has taken to aim for more justice in this cruel world.

Through the power of music, Eedris is able to broadcast a message loud and clear, while still managing to throw down a sick beat. He makes no compromises to his integrity, whether it be musical or political! Eedris Abdulkareem has always been known to be an artist who knows how to meld an important moral and beautiful music into one catchy and deep fusion. One could say he is like a spiritual successor or an estranged brother to Femi Kuti, as he knows how to pull in the crowds and tell an important message at the same time.

These releases are now available on Spotify and all major online streaming services and retailers, and of course the music videos bring home the fire beats, all while honouring how serious the theme of the song is. It’s the perfect combo package, considering the single itself works fine without visuals, but having them helps hammer it home that much more.

Eedris Abdulkareem is an inspiring rapper with an amazing history behind him, and many classics of his such as “Jaga Jaga” and now the “Say No” series and “Country Hard” illustrate his great musical ability. He is not afraid to speak out for what he believes in and is truly a commendable artist. Watch this space, because there’s more where this came from, heartfelt messages and all!