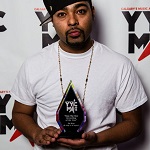 The acclaimed Hip Hop and R&B artist appeared alongside other big names in Calgary this Year, with three separate nominations. He was nominated for Best Urban Recording of 2018 for his song ‘Nothing 2 U’ with Stephen Voyce, and won with ‘Sail Away’ with DJ Newboy, Bobby Soul, and Bobby Blastem. He was also nominated for Best Male Artist of the Year, for his contributions to the local music scene in Calgary, Alberta. The Zimbabwe born Canadian Artist appeared with the other winners on the red carpet with his award, pictured below.

‘Sail Away’ is a smooth R&B track with a mixture of rap and R&B style vocals, and a clear influence from EDM and club music. The song evokes lavish yacht parties in high class destinations like Dubai or Ibiza. The beach/summer vibe is fresh and compliments the vocal talent from the artists involved. Kay L, DJ Newboy, Bobby Soul, and Bobby Blastem have collaborated to create a song that is clearly deserving of the acclaim it has been given.

His other nominated song ‘Nothing 2 U’ with Stephen Voyce, long time collaborator and friend of Kay L, is a song of heartbreak and lost love, and moving on. It’s a very human story, something everyone can understand. Both songs are available on Kay L’s Spotify and Apple Music, and on Youtube. Links can be found below.

Kay L is signed to the W.O.N. Agency, aka The Window Opportunity Network, a Vancouver based label that’s partnered to Blue Pie Records. The label has a global presence in managing and developing the profiles of artists, and despite only being in operation since 2015 has already secured a deal with arguably one of the biggest artists ever, Snoop Dogg. Founder Jay Simpson is confident in the future growth of the company, stating that “Success is already assured”. Considering their success, I think his confidence is quite reasonable. Contact info for The W.O.N. Agency can be found on their website, linked below.