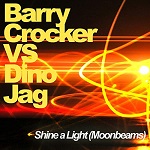 Back in 2005, Barry Crocker was very pleased to let you all in on a little secret, that being his new record with us! Soon, the musical public who grew up with Barry in Australia and the rest of the world over would hear it… “Shine A Light On Me”, also known as Moonbeams. Barry hooked up with the incredible Dino Jag to bring home an album that was a delight to hear! A fusion of the classic crooner golden age and a modern dance beat, this album appeals to nostalgic heartthrobs and newcomers to the scene alike! The Breakbeat blend of the original samples is sure to make you want to get up and dance! You gotta love songs like this – ones that make you reflect on the happy days gone of the past, and feel like you’re in the future as well! The project was started by Barry Crocker himself, and our very own Blue Pie CEO Damien. After a few meetings, the pair dug up some of the work that Barry did in the 70’s. While they were going through some of the records at Bazza’s place, they made a call to Dino, and he was off! Once he was on the case, he locked down on the MOON BEAMS track. Dino has a real gift for mixing, and is one talented singer/songwriter!

Dino got to work on the track, and after a couple of weeks came back with some demo ideas. Dino, Damien, and Bazza worked on the mix a little more, and Barry got to re-do his vocals at Hardwick’s studios at Crowsnest! The thing that is so special about this song is that we have some of the world’s best playing on the original sessions – even some of the legends from Toto joined in, with the backing band featuring their vocals! Yes, that Toto! Let’s take a look at the all-star cast in full.

Combining all this together yields you something that’s simultaneously vintage, as well as being fresh and new! One of the biggest icons in TV history has helped bring this feel-good song to life, as have the newer generation, and the whole foundation of this production becomes based on bringing new life to an old work which deserves it! The retro feeling and futuristic aesthetic dance and entwine elegantly in perfect synergy, combining excellent electric piano, catchy beat, and vocals that send us back in time!

The album itself features the same track twice, with one of the tracks being the radio edit version. And speaking of radio, new life is also being granted to this song via our new radio campaign for it! This gem didn’t live and die in 2005. It’s still shining on, like the brightest moonlight! The Blue Pie radio team are pushing the song to all four corners of the world using the following systems: ipluggers, Feature FM, Jango Radio, Radio Air Play Direct, Air Play Buzz, Australian Community Radio Networks and other networks! If it’s not on any given network already, it’s pending, so let’s wait with bated breath! The song is going to get out there one way or another, and with all these different bases covered, it’s sure to really burst onto the scene! When it does, be sure to check out the new and updated Barry Crocker website, where we’ll be crooning over that accomplishment! Fingers crossed!

The original song “Moonbeams” was composed by Jay Graydon, Barry Crocker, and Harry Garfield. The track mix is produced by Dino Jag and Damien Reilly from Blue Pie.

And if you’re in the mood for a bit of Bazza merchandise, we have just the thing for you right here…

But of course we can’t understate Dino Jag’s contributions! The amazing remix work of Dino Jag has led to a catchy and groovy track, ready to take the world on!

Dino has produced a serries of remix projects with Blue Pie’s Damien Reilly. Together these two greats have remixed one of New Zealands biggest selling physical singles of all time “Shes a Mod”, Rusty Andersons “Hurt Myself“, featuring Sir Paul McCartney on bass, backing vocals and guitars and Australia’s singing legend “Mr Barry Crocker” and his song “Shine a light”.

As Damien Reilly says: “Dino is one of the best artists that I have ever worked with. He is quick of the mark with his ideas are always overflowing with infectious melody”.

Dino is gaining more and more world wide recognition and with names like this to his recording credits already the world is at his feet. Download Dino now from iTunes or stream these great songs from Spotify.