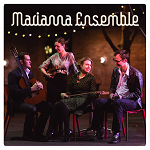 The ensemble draws on the multi talents of its members, which between them share backgrounds in opera, jazz, folk and contemporary music. Since its beginning the ensemble’s original compositions and arrangements of folk and classical repertoire have been winners of several awards.

In 2010, “Marianna” featured in the Peter Butt “I-Spry” film about ASIO and KGB in the 1950s-60s Australia for ABC television. And in 2012 the group released a marvelous and sincere album that shows off their best musical qualities. It’s criminally underrated and showcases well the dynamic that they employ, bouncing off each other’s specific musical niches. Give it a listen!

It’s some quality stuff, isn’t it? One wonders if they chose to make the title eponymous because that was all that was needed to showcase the meaning behind the album- it’s so very them. It’s distinct, unique, and really quite fresh in terms of what music you can find today, and what styles are the most popular. And you can feel the chill of Russian influence- you can feel the snow beneath your feet, you can feel the warmth of the fireplace in each low note, you can feel the sturdiness in some of the more solemn melodies. And the cozy glow in the evening lighting of the cover artwork- it all gives a feeling of a hidden magic, like strolling through a dark city at night and stumbling across a corner lit by hanging globes with good food, drink, and music, and a warm waft from the doorway nearby. It’s delightful when one can truly tell the flavour of the country that produced a given work simply by engaging with it, and we wholeheartedly believe that Marianna Ensemble has achieved just that.

To top things off, here’s a throwback to a concert that they once attended, with snippets of their music throughout. You can really get an earnest feeling from the tone in this video and other such videos featuring them talking, or playing. This band’s existence and their work are both musical triumphs!