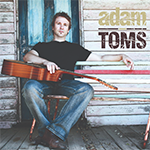 Introducing Adam Toms, an old school Blue Pie favourite. We’ve collaborated with him on one single EP, the stand out Sugar Lips, as well as its music video! He self-distributes all his other albums and songs. Born and bred in country Victoria, Adam Toms is one of Australia’s up and coming modern Country Music singer/songwriters. While growing up in the picturesque landscapes of rural Victoria, Adam spent his teen years playing in pub rock cover bands, where his talents in singing and guitar flourished, and ignited a passion for song writing. Before long, Adam heard the call of the big city lights of Melbourne and soon moved for a new adventure.

It seems that it was a destiny call, as not long after moving Adam met and teamed up with Aria award winning producer/engineer Doug Roberts – best known for his work with artists such as The Badloves, Chocolate Starfish, Boom Crash Opera, Paul Kelly, John Farnham, Mick Jagger and Chris Wilson. In time, Doug introduced Adam to Peter Farnan (Boom Crash Opera) with a view to write some songs together. This proved to be a successful collaboration and the pair wrote many songs. Eventually, Doug, Peter and Adam co-produced a solid album, which lent itself to a ‘commercial radio Rock/Pop’ theme. Many of these songs received support from numerous community radio stations nationally.

Adam had always listened to Country music growing up however it took a few years for it to really start to show in his own writing. He would eventually decide that something was missing, and this was the exploration of the Country genre. This process of moving genres is what has resulted in the amazing blend of musical styles that we find in Adam Toms’ songs. A little like Keith Urban, there is a soothing beauty in Adam’s voice along with stirrings of a kind of heart and soul found in Eric Clapton’s lyrics and storytelling. Also mixed into the cocktail of styles you will find hints of Ben Harper, Ryan Adams, Tom Petty, Hendrix and Gary Moore. Add a twist of country twang and here you have Adam Toms.

From there, Adam gained a new lease on his musical life, and signed with Music Managers Forum President Anita Donlon to take on management duties. From there he signed with us at Blue Pie! It’s an old story we like to look back on, and so today we take the time to introduce you to an old school collab we aren’t likely to forget any time soon. Adam is an unrestrained free artist who mainly works with his own creative passion rather than being set with just one label, and so the fact that he worked with us to distribute Sugar Lips is a credit in and of itself. But of course, that track is far from his entire catalogue… he has plenty more musical surprises in store for curious listeners…

So, check out Adam Toms’ full catalogue complete with music videos and albums via his Blue Pie bio!