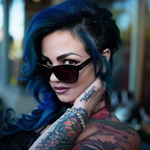 LadyDice is a name that is becoming prominent in the hip hop scene. An inspirational presence, she first made a name for herself with the song Scars, which contained a message intended to save a life.

Since then, she’s progressively snowballed into higher and higher tiers of popularity, and her vocals are now going viral with her appearance in the Suga Boom Boom acapella in the Gypsy Tattoo Parlour!

Originally, LadyDice did not see herself as someone likely to move into hiphop music, and she preferred classic metal soundtracks. However, upon branching out, her style was refined and she decided that this life was for her.

While LadyDice is the musical persona of Ashley Dice, there is enough symbolic meaning within what LadyDice represents to consider her almost a separate entity. To Ashley Dice, LadyDice is an idea, a representation of the rejection of conformism and society’s preconceived notions.LadyDice represents those who repress their true selves, encouraging them to step out and take off the mask, being themselves no matter what the world thinks of them.

LadyDice’s career is going strong and shows no signs of slowing down! To get acquainted with this standout personality, all you need to is watch this interview!