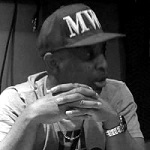 Michael Smith AKA Mike C, the head honcho at Miracle West Entertainment, has worked closely with DJ Central and Blue Pie for some time now, and has brought our attention to awesome artists such as Invinceable, whose track Pump Pump featured along with DL Down3r‘s track in the feature film “Before the Dawn”!

But make no mistake – Mike isn’t just a producer of a label. He’s also an artist, both managing AND writing songs for Miracle West Entertainment! His duality of experience leads to his music being a cut above what you might have heard before. So, it’s probably time you meet him if you haven’t already!

The best way to meet a musician is through their music, and Mike is no exception. Listen to the flow, that bass, that beat, that hook! The sensual lyrics paired with the chill beat perfectly suit a night out hooking up. It ain’t a party song for no kids, and its smooth beats and lyrics will transfix you – just like the rest of Mike C’s catalogue, and Miracle West’s work overall. You can check out Mike’s full catalogue by clicking here! His company bio has it all. And of course, for more of him and his other artists, there’s no better website to check out:

Mike C has been on the hip hop scene for 20 + years. Mike dispels any doubt when he steps up to the mic to let you know that he has a story to tell. These words of life, living and loving in a world that often overlooks the underclass has made Mike C a cult hit within his own community. Always ready to step up to the plate to tell you how the real world is, Mike C’s music is all boiled down to a sonic blast that will leave you gasping for more and more of his pulsating poetic hip hop beats that only he can produce. That is “The Real Mike C”!

Currently, Mike C is the only active artist on the Miracle West Roster, and is distributed by Blue Pie. He has new music constantly in the works, with some fresh releases and videos planned very soon at the time of writing! His latest video “Gonna Get It” is going to be featured in the newest season of DJ Central, which is currently still in development. There’s plenty to look forward to from the West Coast hip hop scene, and Mike and Miracle West are undoubtedly spearheading it with a vengeance! We wouldn’t have it any other way – cheers to Miracle West and Mike.

For more information on Mike C and the rest of the crew at Miracle West Entertainment, check out their website: www.miraclewestent.com