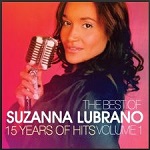 Netherlands based Suzanna Lubrano is one of the most popular female pop artists in the Lusophone markets.

Suzanna is primarily a Zouk artist, although throughout the years she has incorporated different styles in her music, including Coladeira, R&B, Batuqu and Bachata. Currently, her music is often described as Latin Pop.

Suzanna’s success has gone far and wide. She received Gold and Platinum albums in the Lusophone market. Suzanna is also the winner of the 2003 Kora All African Music Award for Best African Female Artist, in a televised event (held in Johannesburg, South Africa) watched by millions of people in Africa and beyond. She has also won the 2010 Museke Online African Music Award for Best African for Best African Artist based in the Diaspora, being the only Cape Verdean artist to be awarded in an election dominated by the major English and French language African countries. In 2011, Suzanna Lubrano was the most awarded female solo artist at the internationally widely televised first Cabo Verde Music Awards Show (CVMA), winning two awards for her song Festa Mascarado!

Suzanna has achieved so much in a short space of time including No. 1 chart placements on the Urban charts for The Box (MTV Networks) and FunX Radio, the Netherland’s leading Urban radio station. This was the first time Cape Verdean language songs and non-English and non-Dutch language songs reached the number one position in the charts of MTV. Fast forwad to 2011, Suzanna’s single Festa Mascarado has become an international club hit and has been in the Top Ten Playlists for Angola radio networks, as have many of her other songs since 1999. At one point the top contained no less than five of Suzanna’s songs.

Suzanna’s latest album has just recently hit the Blue Pie Spotify in the last few months! For all the Suzanna Lubrano fans in the audience, this isn’t one you can afford to miss- this is an anthology of all of her greatest hits from a period of 15 years! Including the aforementioned Festa Mascarado!

Suzanna Lubrano is a Blue Pie Records USA artist and is published by Blue Pie Publishing USA for the world. You can check out more information and the latest news on Suzanna at the following links:
www.suzannalubrano.com
www.facebook.com/SuzannaLubranoMusic

It’s got that perfect amount of flavour to it. You can see that Suzanna deserves her fame! Whether you’re discovering her for the first time or revisiting some spicy classics, this playlist is one that’s absolutely begging to become part of your finest musical collections.

Check out some of these great hits now on YouTube: