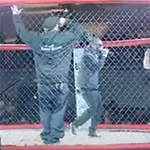 And if you’ve been following DL Down3r’s social media and reading all the hype shoutouts in the leadup to this event, you may even know what this is already! That’s right – ARENA WARS! The fighting competition with an introduction like no other – Mr Suga Boom Boom himself and his crew providing entertainment that will pump you up and get you ready to rumble. Check out all the shoutouts that DL’s been putting out before the event happened! Not only that, but of course the official Arena Wars Facebook group didn’t miss their chance to add to the hype either!

As you can see from the vid, the incredible result rocked the crowd and gave the fighters the fuel they needed to throw down with the vicious energy that wins games! We want to congratulate DL and crew. Without Uno Tha Prodigy, Stone P, and Cordell Drake, that room wouldn’t have been rocked as hard, we think it’s safe to say! A crew makes the world go round, remember that fam. And with DL’s crew pumping up the crowd and the competitors, there’s no battle they can’t face.

Bearing all that in mind, do you readers think that the next show Down3r has planned will bring the same kind of crazy energy? We’d like to hope so! See you at the Latin Bash in May… and more details on that later in our tours and shows section on the Blue Pie site! Stay tuned!

When you look at DL’s career, it’s clear why they chose him and his crew to hype up the crowd.

As DL himself says:

“I am ready to take my music to the world and make a positive impact on everyone who comes into contact with it. One day I recorded my song Suga Boom Boom using a beat I did off of the refrigerator and uploaded it on Facebook, and overnight it went viral. It now has over 170 million views and counting. The song has taken on its own life and continues to grow everyday.”

It has more than 170 million views now, when you count all the platforms it’s on together! WAY more! Now that’s a success story that we won’t get tired of hearing.

From powerful messages, lyrical poetry and sharp comments on society, to G-funk and Trap/EDM hype songs, he proves that age and experience is the opposite of a liability in today’s rap game. Blast it loud, get ready to feel something, and rest assured knowing that hip hop never died! It’s so alive that it’ll give professional fighters the strength to lift cars over their heads!