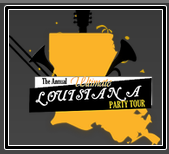 The 2012 tour, which follows the successful national introduction of the Ultimate Louisiana Party concept last year, is expected to entertain more than 50,000 fans from coast to coast. The tour will bring a moveable feast of the best of Louisiana’s unique music, food and culture to diverse venues across the country and will continue throughout the summer.

In a festival-like atmosphere, attendees will enjoy not only the Flavor Band’s signature Louisiana reggae/soul that has captivated national and international audiences for more than a decade, but a complete Louisiana cultural experience highlighted by a mouth-watering menu of savory Red Beans and Rice, Louisiana Catfish,  and  Skillet  Cornbread, with Veggie  Beans as an alternative.

The festival also showcases the world of Hit City Records, one of the state’s leading purveyors of homegrown roots music, including the Flavor Band and its roster of original artists.  Event T-shirts, posters, jewelry, oils and clothing will be also be on sale at the International Market.

The Ultimate Louisiana Party Tour events are open to the public and will be held rain or shine. Various cover charges will apply for some events as determined by the host organization, while there will also be free shows (TBA). The success of the tour is made possible by hundreds of community volunteers eager to share their cultural affinities and to promote greater mutual appreciation and spiritual unity.

For more information on the tour, visit:
ultimatelouisianaparty