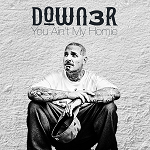 Youtube is Down3r's homie! "You Ain't My Homie" slowly growing in views!

Ever since Down3r’s legendary album “SIDE CHICK” dropped, there’s been one standout new track of his on the menu… aside from the legendary Suga Boom Boom, of course. The one and only “You Ain’t My Homie”.

Well for the true Down3r connoisseurs in the audience, you may have heard about something special going on with this beloved yet underrated banger. You may have even contributed to the topic of this very story! Yep, we’re here to report on the staggering growth of the track on the Youtube topic channel for Down3r! Be honest – how many of these views were yours? 😉

With over 530k views at the time of writing, this track has seen some significant growth. Hopefully it isn’t from an influx of people finding out their homies are fake friends! But even if it is, it’s always nice to have tracks that you can relate to, and this might just be the one for you.

The video in question is seeing a sudden burst of attention, seeing as most of the comments are from the last few months, whereas the video itself was uploaded back in 2016! That’s what you call a sleeper hit, ladies and gentlemen! With a flow that might herald a new 2pac, Down3r isn’t slowing down, and quite a lot of his catalogue, popular as it is, is waiting to REALLY blow up, much like You Ain’t My Homie. So for the few of you in the readerbase who are STILL unlucky enough to have not heard of Down3r after all this time and aren’t sure where to start, consider this an introduction to the rest of your hip hop life!