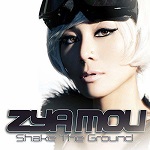 The Chinese, Canadian based star has already found massive success with her music, with an impressive discography that she has been building since 2000. With over 1.5 billion plays on music sites in China, she has already conquered Asia, and now she has her sights set on the west with her new single Shake The Ground.

Shake The Ground is a new direction for Zya, with her usual focus being pop or worldbeat, which is a blend of pop or dance with traditional music, Shake The Ground moves away from this with its clear influence from EDM or club music. It still features her elegant vocals, of course, and there is still some of her worldbeat tendency with what sounds like a Guzheng, a traditional Chinese stringed instrument which has a very distinctive pitch. The addition of electronic influences to this mix turns her already impressive style into something incredible.

Shake The Ground is an epic, powerful song, Zya Mou sweeps you away with her voice and compels you to dance. While not quite her typical sound, the changes are welcome, and herald what is sure to be more great work from Zya. Shake The Ground can be found on most music platforms, and is linked below on Spotify, Apple Music, Amazon, Youtube, Soundcloud, and several other platforms. Her personal website is linked below along with her social media, like and follow her for the latest updates on her music.