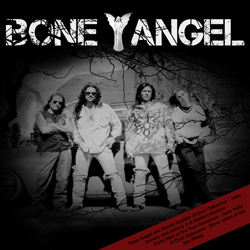 Bone Angel gets a classic set of 3 POWER Metal Tracks to the World to ROCKKKK their eardrums with. We are very pleased to announce the new Bone Angel release is out now on the new Blue Pie Label ” Electrik Blue Records ” www.electrikbluerecords.com The label will feature some of the biggest names in Metal from all over the world. The Group “Bone Angel” was formed after retirement of Ozzie Osbourne in 1982. They worked together for a few very short years until Lowery left to join in a project entitled “Two”. During this short time a few songs were written and recorded, but never released until now. Bone Angel are Frank Star ( Vocals), John Lowery aka John 5 (guitar) now with Marilyn Manson, Terry Nails( Bass) of Ozzie Osbourne and others, Randy Castillo( Drums) of Ozzie Osbourne. These legends are some of the biggest names in Metal today. Check out this release on iTunes here and the new Bone Angel My Space fan page here www.myspace.com/boneangelmusic ROCKKKKKK ONNNNNN !