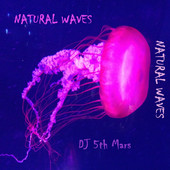 DJ 5th Mars describes himself as the ‘grandfather of Deepscape Techno style’ and his EP ‘Natural Waves’ demonstrates his unique sound and creativity. Released November 2013, ‘Natural Waves’ showcases six of DJ 5th Mars’s most captivating and hypnotic new tracks. Originally from Canada, born into the urban jungle that is Montreal city, DJ 5th Mars quickly developed a passion for all things techno and electro and created his own genre ‘DeepSpace Techno’. DJ 5th Mars is not only a DJ but also an exceptional producer and creator who plays his own music sets. With three albums already under his belt, this EP is set to raise the bar and further establish DJ 5th Mars in the techno and trance genre. ‘Natural Waves’ demonstrates his highly experienced and hands-on style of producing with high quality tracks—perfect for all techno lovers.