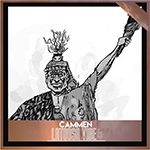 Cammen has been super busy! He’s been throwing out release after release over the past couple of years, and his catalogue is as consistently excellent as ever.

Indeed, Cammen is an up-and-comer on Spotify, and his dope beats have been turning our head at Blue Pie since we featured him on Soundwaves From Africa volume 44 back in 2018!

But he isn’t a rookie any more, and has been releasing track after track after track to the platform. All of them are catchy, and a couple of them have been redistributed in a new album of Cammen’s, which we wanna talk about today – you ready for the excellent collection known as Latoosa Vibe?

Featuring several of Cammen’s greatest hits from throughout his career, Latoosa Vibe is a certified collection that should be your first stop if you want to introduce this unique Afro sound to curious friends. It’s got a bit of everything, including Cammen’s legendary Kutuba and the remix, which went on to see their own re-releases and re-creations in 2022! But more on that soon, in another story…

The album opens with a gentle piano accompanied by some classic Afropop beats and filtered vocals. The signature catchy beat and gentle synths pull you in and get you swaying and jiving to the beat, and from there it’s all over: you’re caught up in the dance and the album has played every song at full blast before you know it! It’s refreshing to have both the original Kutuba and the remix versions alongside each other, as you can hear the sound getting reinterpreted in a fresh new way in real time – fans of Cammen can hear the influences in his sound and map out the creative leaps he made to arrive at how Kutuba sounds nowadays in all its forms! All in all, this is a perfect example of a vibe that anyone would be happy to chill or dance to – the beautiful thing about Afropop as a genre is that it’s a flexible enough sound for both! So how will you be playing this album?

Moving into 2023, it’s only a matter of time until Cammen throws even more bangers up online, and we’re hyped to see just what he’ll come up with next! How about you, you hype for the Cammen-flavoured future?