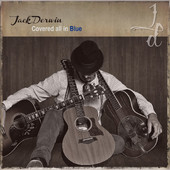 Jack Derwin’s latest release “Covered All In Blue” fuses elements of folk, pop, rock and a little oldschool blues, yet is true to the proud Australian sound. It is an ecelectic acoustic collection, inspired by travels with a guitar, woman, blue’s harp and never wanting to get caught in the mainstream.

The 18 track album is a collaboration of foot-tapping 12-bar blues tracks which segway into the deep, heart-wrenching tunes to sooth every soul.

“Covered All In Blue” features the talents of Jack as a multi-instrumentalist alongside Geoff Jones, who holds down the bass, Kosta Theodoridis on drums, Paul Cutlan and Stephen O’Connell on saxophone, John Revai on keyboards and Stephanie Jansen who accompanies Jack with back-up vocals on four tracks of the album.

Fueled with passion and filled with all styles of instrumentation, you will be blown away by the musicality of harmonicas, slide guitar and saxophone accompanied with chords by keyboard and guitar.

The stomp box adds a percussive sense to the album alongside the acoustic guitars, which are used as a muli-lingual instrument throughout the album, a talent which is executed by Jack to the finest degree.

The crisp acoustic guitar chords and vocals merge as the harmonies cross through eachother to create a beautiful blend that treats the ear.

Jack often writes about the blues, or reflects on the land of Australia and the ancestors that inhabited it. On “Covered All In Blue”, Jack captures true stories and tales of land, life and love through his lyrics on tracks like “Magnolia”, “Woman Let Me Know” and “Take Me Back Home”