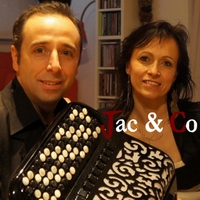 With just the talented combination of vocals and an accordion, “Jac & Co” captivate audiences and transport them to the dance halls and street side cafés of France’s yesteryears. On their worldwide “Paris Café Tour”, they will inspire audiences with the eternal sounds of France and Paris! According to the French magazine Le Progrès, they “bring back almost a century of the traditional French ‘chanson’ songs in the likes of Édith Piaf and Francis Lemarque.”

For over 27 years, virtuoso accordionist Jacques Pellarin has brought the sounds of the French countryside to all corners of the globe. With international song placements, 7 albums and multiple world tours, he has shared his musette-inspired accordion compositions with world-wide audiences. And now, for his most intimate performance to date, he will tour with his lifelong muse, Corinne Pellarin, as Jac & Co, who have already released their first EP album which you can download in the link below. The EP “Jack and Co” will also be available on Itunes and Amazon soon. In the meantime, get swept away with a preview of their music on Youtube here.