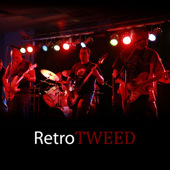 For those who think rock isn’t what it used to be, RetroTWEED prove otherwise with an astonishing new album of songs bound to impress fans of the rock genre. Old School guitar solos are scattered throughout the songs as a throwback to retro rock. There are also some very catchy chorus’ to be found. The album looks and feels like a tribute to hard rock bands from the 80s and 90s and lives up to the former glory of the genre. RetroTWEED’s self-titled debut is a welcome relief for those waiting for a new rock album to come out which retains the feel of old school rock.

For more information on the band, head to their MySpace: www.myspace.com/retrotweed

Check it out now and purchase it through iTunes!