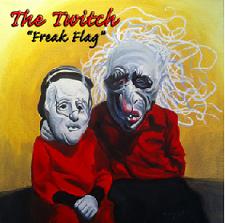 Classic hard rockers, The Twitch have released their album ‘Freak Flag’ – and with much aniticipation. Infused with pure hard-rock style and their natural quirky personalities, the album is tough, rough and overloaded with classic/psychedelic rock. The Twitch are dedicated to making music that rocks the listener to their core, and the album does exactly that. It also feature two new songs “Speak Out” and “Free Rider” which are absolute taste makers.The Twitch are currently in video production for these two songs, which are expected to be released in early May.

You can check out the album for yourself at bandcamp.

The Twitch are also busy rehearsing for upcoming gigs in the Seattle-Bellingham area. So keep a close eye on them for finalised dates. You can follow the band on the following links:
twitchtheband.com
facebook/thetwitch